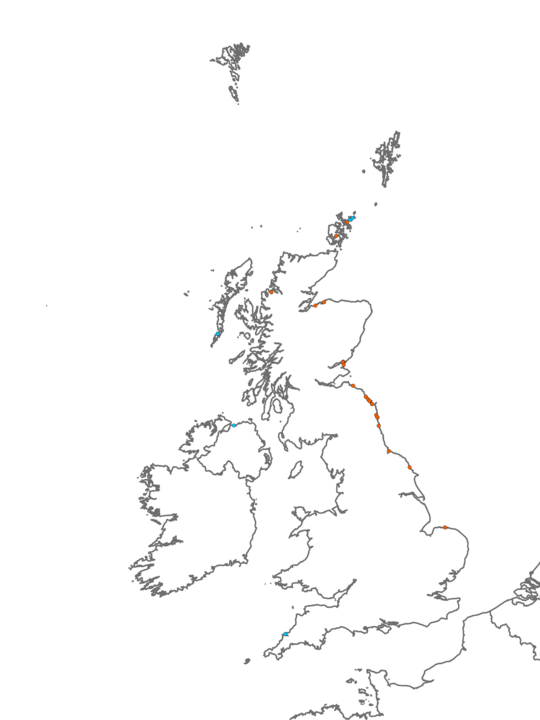 This biotope occurs mainly on the mid and lower shore of moderately wave-exposed coasts, with medium and fine clean sand which remains damp throughout the tidal cycle and contains little organic matter. The sediment is often rippled and typically lacks an anoxic sub-surface layer. Polychaetes make up the greater part of the community, and are dominated by Paraonis fulgens, Capitella capitata, Pygospio elegans, Ophelia rathkei and Eteone longa. The presence of polychaetes may be seen as coloured burrows running down from the surface of the sediment. Nemerteans may also be present. The amphipods Bathyporeia pilosa and B. sarsi are often present.

Po.Pful may be present higher up on the shore than Po.Aten, or lower down than the AmSco communities or Ol.FS. The strandline community Tal may be present on the same shore where driftlines of decomposing seaweed and other debris occur on the upper shore.

The infauna of this biotope may be reduced during winter, as increased storminess and wave action increases sediment mobility and may lead to some species migrating or being washed out of the sediment. The lugworm Arenicola marina may be present occasionally, usually as a temporary recruitment and is likely to be washed out during storms.

Occurs under more exposed conditions in more mobile sediments, and tending to be present higher up on the shore. Infauna is more sparse, dominated by Eurydice pulchra, with polychaetes virtually absent.

Occurs in more exposed conditions, where sediments are less stable. The infauna is dominated by amphipod species, particularly Pontocrates arenarius, while the polychaete fauna is relatively sparse and dominated by Scolelepis squamata.

Occurs in more sheltered conditions. The sediments are more stable than in the case of Po.Pful and therefore support bivalves, especially Angulus tenuis, in addition to a range of polychaete species similar to the Po.Pful assemblage.

Occurs lower on the shore. P. fulgens is not always present, the infauna is dominated by Nephtys spp.