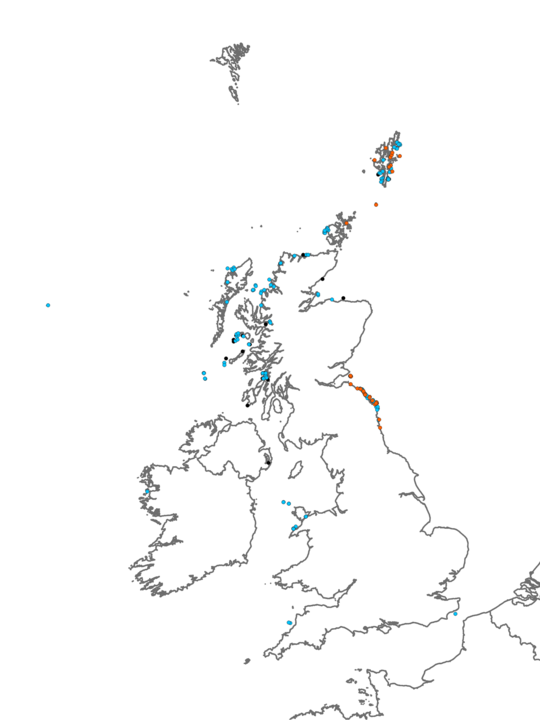 This variant is typically found on the upper faces of exposed and moderately exposed circalittoral bedrock or boulders subjected to moderately strong to weak tidal streams. From afar, the seabed has a rather sparse, grazed appearance, reminiscent of a brittlestar bed after the brittlestars have moved elsewhere. The rocky substratum is generally covered with encrusting red algae and the white, calcareous tubes of the polychaete Pomatoceros triqueter, dotted with the abundant urchin Echinus esculentus. Under closer inspection, Alcyonium digitatum are usually seen attached to the rocky surface underneath rock overhangs and large boulders. Although they may be recorded as abundant or common in some areas, their relatively small size means that their biomass is generally lower than in other biotopes. Sparse clumps of robust hydroids such as Abietinaria abietina are frequently observed, and bryozoan crusts such as Parasmittina trispinosa are occasionally seen. Echinoderms such as the brittlestars Ophiothrix fragilis and Ophiocomina nigra, and the crab Cancer pagurus may be seen within crevices in the boulders/rock whilst the starfish Asterias rubens may be seen on the rock surface. Muddy-gravel patches between boulders (especially within Scottish sealochs) provide a suitable habitat for the anemone Urticina felina. The top shell Gibbula cineraria is occasionally seen grazing on the rock surface. Within this biotope, there is some regional variation. The robust hydroid A. abietina is typically found in higher abundances in northern (Scottish) regions, especially around the Isle of May.

Above the FaAlCr.Pom variant in the infralittoral zone, species such as Alaria esculenta and Laminaria hyperborea are found in more wave exposed sites (KFaR.Ala/KFaR.Lhyp) while species such as Laminaria saccharina may be found above FaAlCr.Pom in the more sheltered examples. Due to moderately tide-swept conditions this variant is found in, clean, coarse sediment biotopes are generally found below FaAlCr.Pom. Typical species found in these coarse sand/gravelly biotopes include Neopentadactyla mixta and Lanice conchilega (SS.SMx.CMx). Where wave exposure increases, this variant tends to change to CarSp.PenPcom,, dominated by Caryophyllia smithii, Corynactis viridis, encrusting red algae and bryozoan crusts. Where tidal stream and wave-exposure decreases, this variant develops into a similar biotope dominated by encrusting red algae, Echinus esculentus and C.smithii (FaAlCr.Car).

This sub-biotope occurs on wave-exposed to wave-sheltered sites subject to only weak tidal streams. It is similar to FaAlCr.Pom in that it is relatively barren, but has a higher diversity of species, and has frequently occurring C. smithii and bryozoan crusts.

This sub-biotope occurs on more wave-exposed sites, but is subject to similar tidal streams as FaAlCr.Pom. Both these sub-biotopes are very impoverished with a similar range of species, although FaAlCr.Adig tends to have much higher densities of A. digitatum than FaAlCr.

This biotope occurs in sheltered sea lochs, subject to weak/very weak tidal streams. This biotope is similar to FaAlCr.Pom in that it is relatively barren; heavily grazed by E. esculentus. Pink coralline crusts and large solitary ascidians are the prevalent species found. 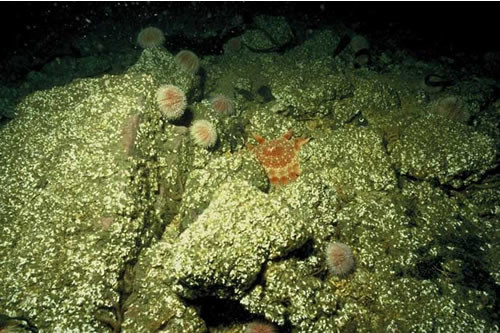 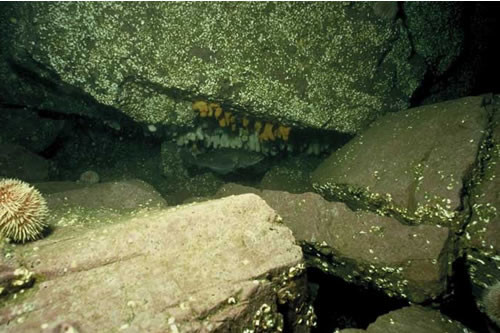