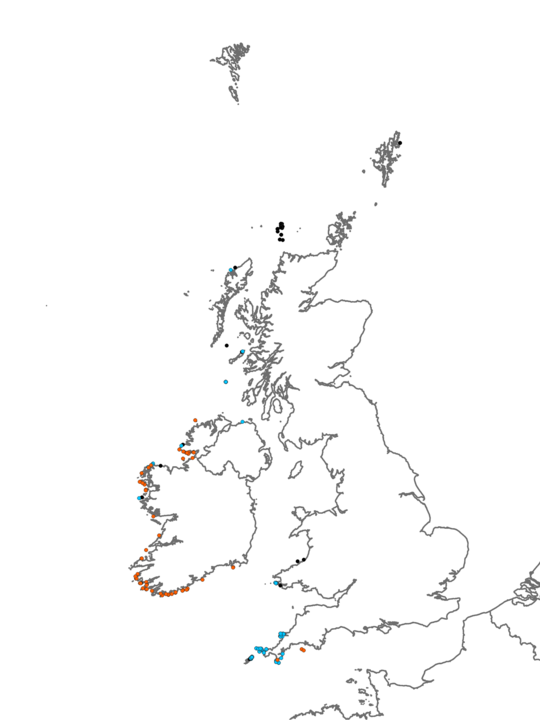 This variant is typically found on the upper faces and vertical sides of wave-exposed bedrock or boulders subject to moderately strong to weak tidal streams. The fauna is often sparse with the frequently observed Echinus esculentus giving it a grazed appearance, but the community may also be affected by violent storm action working into deep water during winter storms. Despite this spartan appearance, the community is relatively diverse and contains a wide range of sponges, hydroids, bryozoans and echinoderms. This variant is found on open coasts or offshore, and is characterised by the cup-coral Caryophyllia smithii, Alcyonium digitatum, the sea urchin Echinus esculentus, large specimens of the sponge Cliona celata, encrusting bryozoans and encrusting red algae. Although this variant tends to occur in deep water (depth range of 20-30m), a high degree of water clarity allows some red algae to grow at these depths. Other species recorded include large specimens of Haliclona viscosa, the bryozoans Parasmittina trispinosa, Porella compressa and Pentapora foliacea, the sea cucumbers Holothuria forskali and Aslia lefevrei and sparse hydroids such as Abietinaria abietina, Nemertesia antennina, Nemertesia ramosa and Halecium halecinum. Anemones such as Corynactis viridis, Sagartia elegans and Urticina felina are also frequently seen. Various other species characteristic of wave-exposed rock include the sponges Pachymatisma johnstonia, Stelligera stuposa, the starfish Luidia ciliaris, Marthasterias glacialis, Asterias rubens, Henricia oculata, the crinoid Antedon bifida, the barnacle Balanus crenatus, the top shell Calliostoma zizyphinum and the polychaete Pomatoceros triqueter. The majority of the records within this variant originate from the west coast of Ireland.

Exposed kelp forest and park biotopes such as LhypR with species such as Laminaria hyperborea are typically found shallower than this biotope. Deeper, this biotope is believed to graduate into PhaAxi (deep erect sponges), as both these biotopes are common around the west coast of Ireland.

This biotope occurs in slightly more sheltered shallower sites with stronger tidal streams. However, they are both found on similar substratum. FaAlCr has a much less diverse, impoverished fauna than CarSp.PenPcom possibly due to grazing pressure from E. esculentus. CarSp.PenPcom also has a more diverse range of sponges, hydroids and bryozoans.

This biotope occurs on similar wave-exposed upward-facing bedrock subject to stronger tides than CarSp.PenPcom. The characterising feature of CvirCri are dense aggregations of jewel anemones C. viridis and cup corals C. smithii with an underlying crisiid turf. CarSp.PenPcom has larger amounts of brittle and encrusting bryozoans such as P. compressa, P. foliacea and P. trispinosa.

This biotope occurs on similar substratum in similar exposed conditions as CarSp.PenPcom, but is subject to stronger tidal streams and occurs only on upper-facing substratum. It is characterised by the abundant Ophiothrix fragilis and common Ophiocomina nigra, and there is typically a lower abundance of C. smithii.

This biotope occurs under similar conditions as CarSp.PenPcom, although it tends to be found at significantly deeper depths. Although high abundance's of C. smithii are recorded in this biotope, PhaAxi has a much more diverse sponge fauna, especially erect sponges.