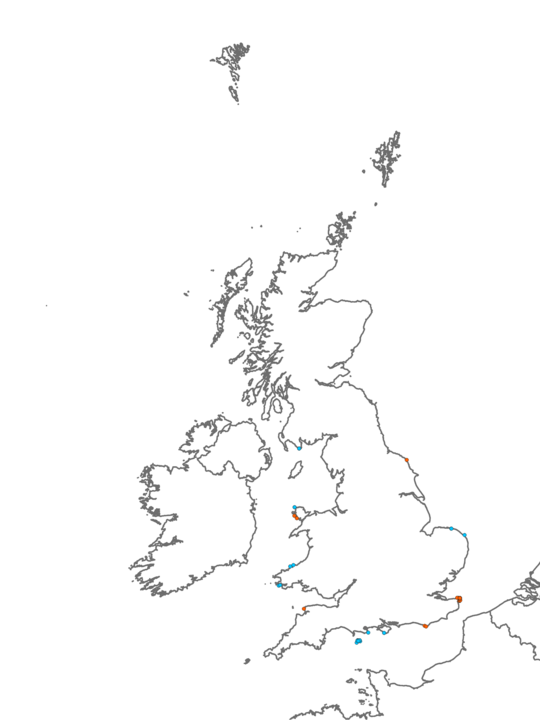 This biotope is typically found on slightly sand-scoured, tide-swept, moderately exposed circalittoral bedrock and cobbles. It is commonly recorded from the shallower reaches of the circalittoral around depths from 5m to 15m BCD, as it occurs mostly in very turbid waters. From afar, the physical characteristics are usually silted bedrock reefs and cobble, interspersed with patches of clean sand, causing a scour effect on the rock. Dense aggregations of the ascidian Molgula manhattensis form a silty mat on the rock and there is a sparse hydroid and bryozoan turf. A hydroid turf, composed of Nemertesia antennina, Halecium beanii, Hydrallmania falcata, Sertularella gaudichaudi, Tubularia indivisa and Alcyonium digitatum, in varying amounts, occurs at most sites on the tops of boulders and ridges. A bryozoan turf is also present, but not usually dense and includes Flustra foliacea, Alcyonidium diaphanum, Electra pilosa and the crust-forming bryozoan Conopeum reticulum. The polychaete Lanice conchilega thrives in the sandy patches which often occur between the rock ridges. The scour effect tends to reduce the diversity of sponges present with only Halichondria panicea occasionally present. Isolated clumps of the polychaete Sabellaria spinulosa may be present but they do not occur in dense aggregations as in the Sspi.ByB biotope. The anemones Urticina felina and Sagartia troglodytes may occur in cracks between cobbles or on stones buried in the sandy substratum. The anemone Sagartia elegans is more commonly found attached to crevices in the bedrock. Other species such as the hermit crab Pagurus bernhardus, the barnacle Balanus crenatus, the polychaete Sabella pavonia and Pomatoceros triqueter may all be present whilst the crab Pisidia longicornis may be found under cobbles and stones. Records of this biotope are distributed along the south coast of England and the north Wales coast as well as Pembrokeshire near the entrance to Milford Haven.

As this biotope is often recorded on soft rock (chalk), soft rock communities (SfR biotope complex) would be observed in close proximity with species of the genus Polydora and piddocks (Pholas spp. and Barnea spp). Moderately exposed kelp forests may be found within the shallow infralittoral zone.

This biotope occurs on wave-exposed circalittoral cobble, subject to strong to moderately strong tidal streams. Flustra may be found in varying amounts in both these biotopes, but Flu.Hocu has a more diverse range of hydroids and sponges, with Haliclona oculata dominant in Flu.Hocu yet absent in Mol.

This biotope is found under similar exposure and tidal stream regimes as Mol but occurs in much less turbid conditions. F. foliacea is present in both these biotopes, but is more abundant in FaAlCr.Flu. The absence of M. manhattensis in FaAlCr.Flu is also noteworthy.

This biotope is found under similar conditions as Mol but the substratum tends to be less heterogeneous, composed primarily of bedrock/boulders and it is found in less turbid conditions. F. foliacea and a similar hydroid turf may be found in both biotopes, but FluCoAs.Paur has a diverse range of sponges (including commonly occurring Cliona celata) and bryozoan turf with colonial and solitary ascidians. Mol has dense aggregations of M. manhattensis which distinguish it from others.