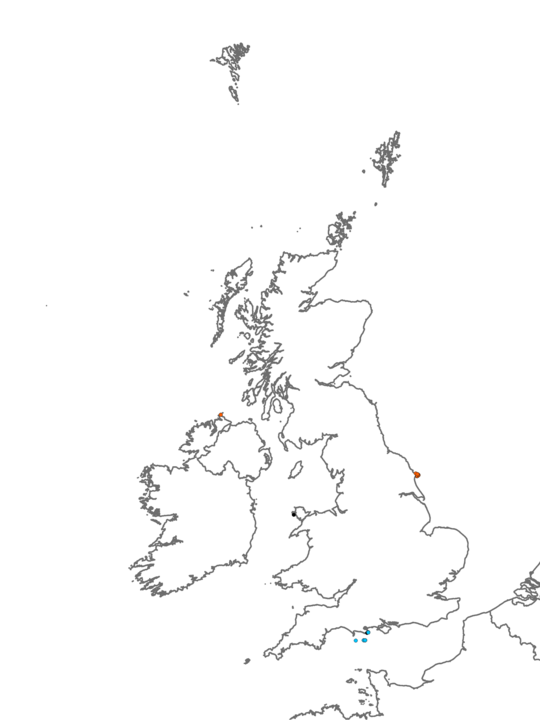 This variant is typically found on the upper face of moderately exposed, moderately tide-swept, circalittoral bedrock or boulders. Sand and silt are periodically re-suspended in the water column, resulting in scour-tolerant species being characteristic of these areas. There is a dense covering of the scour-resistant bryozoan Flustra foliacea attached to the bedrock plains and boulders. The colonial ascidian Polyclinum aurantium commonly covers the rock surface at most locations within this biotope - itself incorporating sand grains into its surface to give it the appearance of sandy rock nodules. Other ascidians that may occur in this crust are the flat, encrusting colonial Botrylloides leachi, Botryllus schlosseri and the colonial ascidian Clavelina lepadiformis, although in varying quantities at each location. A short turf of other bryozoans such as Alcyonidium diaphanum, Bugula plumosa and Bugula flabellata occur amongst the ascidians. Other species found in this biotope are the sponges Cliona celata, Leucosolenia botryoides and Scypha ciliata, the hydroids Tubularia indivisa, Nemertesia antennina, Halecium halecinum and the anthozoans Alcyonium digitatum and Urticina felina. Echinoderms which may be present include the starfish Asterias rubens, Crossaster papposus and the brittlestar Ophiothrix fragilis. Crustaceans such as the crab Cancer pagurus, the hermit crab Pagurus bernhardus and the lobster Homarus gammarus may be observed in crevices and under boulders. The palps of the polychaete Polydora spp. may be observed whilst the nudibranch Janolus cristatus may be seen preying on the hydroid/bryozoan turf. This variant is commonly found on the Northumberland coast, Flamborough Head and the Lleyn Peninsula.

As FluCoAs.Paur tends to occur in waters with a sediment load, the resulting light penetration is reduced, meaning that kelp forests such as Lhyp, normally found shallower than FluCoAs.Paur in the infralittoral zone, are present over a narrower depth range.

This biotope occurs on more heterogeneous substrata, composed of bedrock ridges with cobbles and sand plains, rather than predominantly bedrock in the case of FluCoAs.Paur. Both biotopes contain F. foliacea and a similar hydroid turf, but Mol lacks the diversity of sponges and the dense polyclinid ascidians. It is the dense aggregations of Molgula manhattensis which distinguish this biotope from others.

This variant occurs on slightly more wave-exposed sites but subject to similar tidal streams. Both biotopes are found on the upper faces of circalittoral bedrock and boulders. Although both biotopes feature F. foliacea as a dominant feature of their fauna, FluCoAs.SmAs has a much more diverse associated sponge fauna and lacks the abundant sheets of the colonial ascidian Polyclinum aurantium.

This variant occurs on slightly more wave-exposed sites but subject to similar tidal streams. While FluCoAs.Paur is found on circalittoral bedrock or boulders, FluCoAs.X occurs on mixed substrata (boulders, cobble, pebble and gravel). Although both biotopes feature F. foliacea as a dominant feature of their fauna, FluCoAs.X has a much more diverse associated fauna and lacks the abundant sheets of the colonial ascidian Polyclinum aurantium.

This biotope is found under similar exposure and tidal stream regimes as FluCoAs.Paur but occurs in slightly deeper water depths. FaAlCr.Flu is also found on similar rocky substrata as FluCoAs.Paur. While F. foliacea is the dominant bryozoan present in both, it is the presence of dense aggregations of Polyclinium aurantium which distinguish FluCoAs.Paur from this biotope. 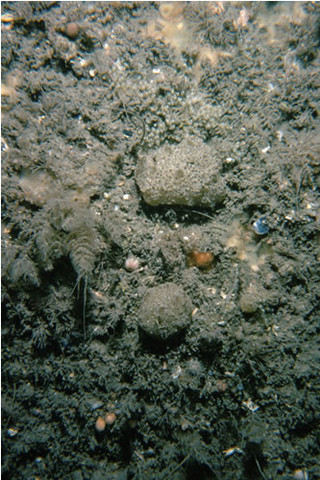