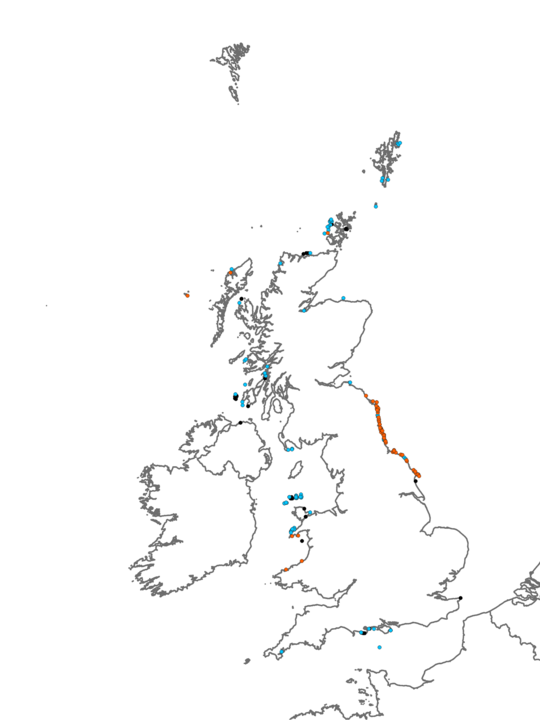 This variant is typically found on the upper faces of moderately wave-exposed circalittoral bedrock or boulders subjected to moderately strong tidal streams. These rocky patches may be interspersed with gravelly sand patches, causing a scouring effect. From afar, the variant appears dominated by the bryozoan Flustra foliacea. Alcyonium digitatum may also be seen attached to the rocky substratum. Under closer inspection, the white tubes of the polychaete Pomatoceros triqueter may be observed on the rock and boulders, especially on vertical faces. There may be sandy/gravelly patches in between the boulders colonised by the anemone Urticina felina. The regular occurrence of large numbers of the sea urchin Echinus esculentus in this biotope may be responsible for grazing the faunal and algal turf, thus keeping species richness relatively low. Other echinoderms that may be seen include the ubiquitous starfish Asterias rubens and the common brittlestar Ophiothrix fragilis. Sparse clumps of the hydroids Thuiaria thuja, Abietinaria abietina, Nemertesia antennina and Tubularia indivisa are occasionally seen attached to the rocky substratum. The hermit crab Pagurus bernhardus, the polychaete Sabella pavonina and sparse bryozoan crusts may also be present. This biotope is characteristic of the bedrock terraces along the Northumberland coast that are generally species impoverished compared to similar F. foliacea biotopes on the west coasts of the UK, which have a more diverse range of sponges, hydroids and bryozoans. As the turbidity levels increase in this fairly silty biotope, so the species diversity is reduced.

This biotope typically occurs around coasts subject to sand scour and siltation. Associated biotopes common around the north-east coast of England include circalittoral gravel and coarse sands. Typical species present include Echinocardium, Lanice conchilega, Ensis spp., Mya truncata and Myxicola. Where suitable substratum is available, exposed kelp forests occur in the infralittoral (the latter normally occupies a narrow band due to the high silt loading in the water column). Where this biotope occurs along with chalk or limestone bedrock and boulders, piddock dominated biotopes (Pid) may also be found.

This biotope is found under similar exposure and tidal stream regimes as FaAlCr.Flu but occurs on a shallower, more sandy/cobbly substrata. F. foliacea is also prevalent in this community, but there is a more diverse hydroid, ascidian and bryozoan community, including Molgula and Alcyonidium respectively.

This biotope is found under similar exposure and tidal stream regimes as FaAlCr.Flu. While F. foliacea is the dominant bryozoan present in both, the character and species richness of these two biotopes are completely different. In addition, FluCoAs.Paur has dense aggregations of Polyclinium aurantium which distinguish this biotope from FaAlCr.Flu.

This biotope occurs over a similar range of wave-exposures but tends to occur in sites subject to moderately strong to strong tidal streams. Both biotopes tend to occupy the same type of substrata (bedrock, boulders, cobbles and sand influenced). This biotope has a very diverse sponge, hydroid and bryozoan community compared with FaAlCr.Flu. Characterising species that are absent in FaAlCr.Flu include Sertularia argentea, Balanus crenatus, Bugula plumosa and Scypha ciliata.

Unlike FaAlCr.Flu, the substratum is more mixed, consisting of boulders, cobbles and pebbles. This biotope also has a diverse sponge and bryozoan turf community.

The substratum consists predominantly of cobbles rather than bedrock and boulders. FluHocu contains F. foliacea but also has a more diverse faunal component, with Haliclona oculata, N. antennina, Alcyonidium diaphanum and the amphipod Dyopedos porrectus. 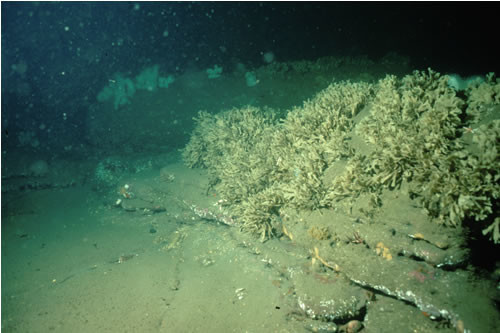 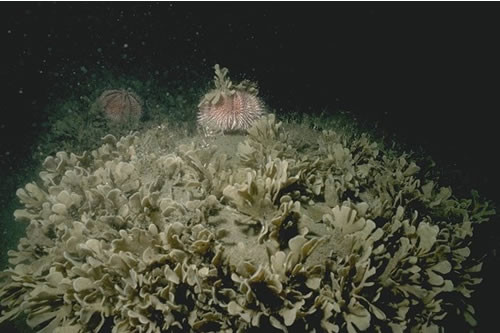 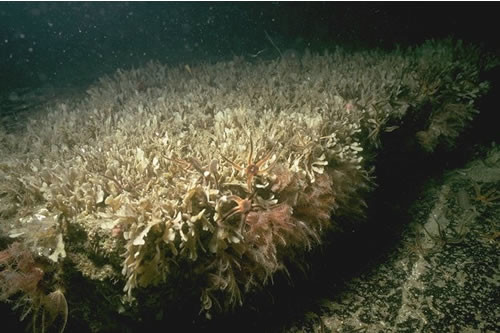