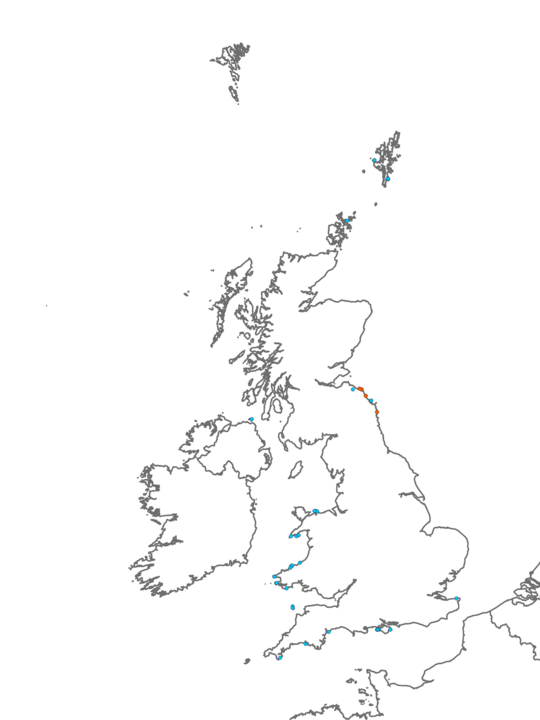 Mid and upper shore mobile boulders/cobbles on cave floors and the lower reaches of cave walls which are subject to scour are generally devoid of macro-fauna and flora. However, where light is available around the cave entrances, encrusting coralline algae may cover the rock and boulder surfaces. In some instances they may support sparse fauna such as the limpet Patella spp. and the winkle Littorina saxatilis.

This biotope is situated on the floor, or at the base of cave walls, often with a zone of ScrFa above (where the scouring effect of boulders is less). In areas of extreme wave exposure this zone will extend high up the sides of the cave and in less wave-exposed conditions where the effects of scouring are reduced, some fauna may be present. At the entrances and 2-3 metres into upper shore caves, a zone of Sem may occur above the BarCv, becoming a zone of VmucHil further into the cave. In mid shore caves, BarCv is above by a zone of ScrFa (sparse fauna), and in caves on the lower shore, the surge-tolerant SR.Den may occur above this zone.

In calmer summer months cave mouths may have some ephemeral algae (e.g. Enteromorpha intestinalis) and a spat-fall of barnacles or limpets.

Occurs closer to the cave entrance or slightly higher on the cave wall. ScrFa is also a species impoverished biotope. It is distinguished from BarCv by the presence of a faunal assemblage which may include sponges, bryozoans, barnacles and spirorbid polychaetes.