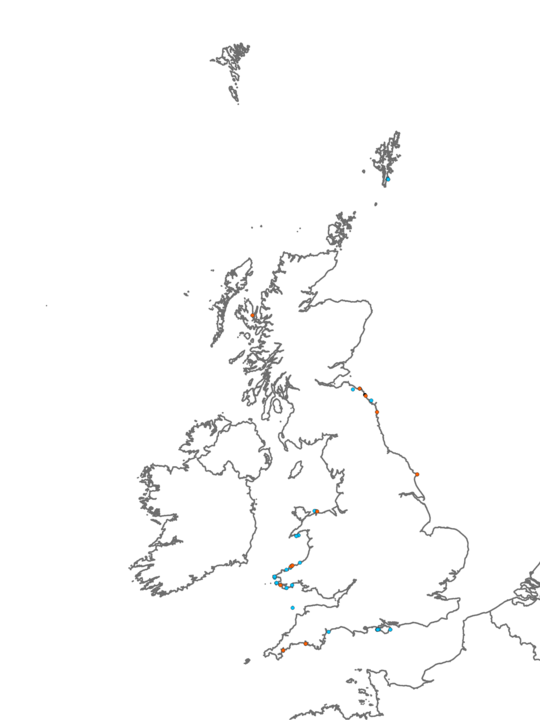 Upper to lower shore sand- or pebble-scoured cave walls characterised by an impoverished faunal assemblage which may include bryozoan crusts, scattered sponges Halichondria panicea, barnacles such as Semibalanus balanoides or often large Balanus crenatus and the limpet Patella vulgata. The isopod Ligia oceanica may seek refuge in crevices in the rock, and due to the decreased effect of desiccation in these damp caves, other species such as the anemone Actinia equina and spirorbid polychaetes are able to extend further up the shore than normally found on open rock. The lower section of the wall which is subject to greatest scour may be characterised by a band of Pomatoceros triqueter and spirorbid tube-forming polychaetes. In wave sheltered conditions, this biotope may extend to the cave ceiling. The rear of caves on the lower shore may support only sparse fauna consisting of spirorbid polychaetes and barnacles such as Chthamalus montagui with scattered Pomatoceros sp., scattered bryozoan and coralline crusts and in the south-west, occasional Sabellaria alveolata. Shade-tolerant red algae such as Lomentaria articulata may occasionally occur. Due to the low species abundance in this biotope, there may be a variation from cave to cave, depending on local conditions.

This biotope is found in caves between the barren (of macro-fauna or flora) or very species poor BarCv zone and the wave-surged, more densely populated FaCr zone. On the walls above the scour and near the cave entrance the community may grade into a red algal dominated community (AudCla).