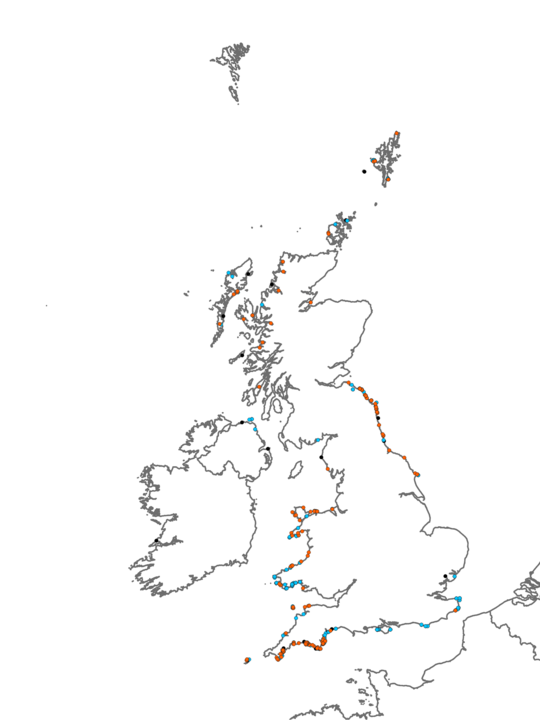 Where caves and overhangs occur on rocky shores, the shaded nature of the habitat diminishes the amount of desiccation suffered by biota during periods of low tides which allows certain species to proliferate. In addition, the amount of scour, wave surge, sea spray and penetrating light determines the unique community assemblages found in upper, mid and lower shore caves and overhangs on the lower shore. Biotopes from the surrounding shore such as MytB, Sem or any of the fucoid communities occasionally extend into cave entrances. Sem often extends some way into the cave. Other open shore biotopes may also be found within caves, such as the green seaweed Prasiola stipitata on cave roofs where birds roost (Pra), and localised patches of green algae where freshwater seepage influences the rock (Ent). Rockpools containing encrusting coralline algae (Cor), fucoids and kelp (FK) and hydroids and littorinid molluscs may occur also on the floor of cave entrances. The cave biotope descriptions are largely based on data obtained from surveys of Berwickshire caves (ERT,2000), chalk caves from the Thanet coast (Tittley et al, 1998; Tittley & Spurrier 2001) and data from Wales (CCW Phase 1 data). In general, the biomass and diversity of algal species found in upper and mid-shore littoral caves decreases with increasing depth into the cave as the light levels diminish. Fucoids are usually only found at the entrances to caves, but red algae, and filamentous and encrusting green algae are able to penetrate to lower light intensities towards the back of the cave, and mats of the turf forming red seaweed Audouinella purpurea and/or patches of the green seaweed Cladophora rupestris may occur on the upper walls (AudCla). Brownish velvety growths of the brown algae Pilinia maritima occurring in mats with the red alga A. purpurea on cave walls and upper littoral levels of cliffs (AudPil) should not be confused with the green (GCv) or golden brown algal stains often found above this zone on the ceilings of the caves (AudPil; ChrHap). Below is a zone of Verrucaria mucosa and/or Hildenbrandia rubra on the inner and outer reaches (VmucHil). Fauna usually only occur on the lower and mid walls of the caves and generally comprise barnacles, anemones and tube-forming polychaetes (ScrFa; FaCr) depending on the level of boulder scour or wave surge. Where the floors of caves consist of mobile cobbles and small boulders, little algae and fauna occur due to the effects of scouring (BarCv). Vertical or steeply sloping cave walls and overhangs on the mid and lower shore, subject to wave-surge but without scour, support a rich biota of sponges, hydroids, ascidians and shade-tolerant red algae (SByAs, SR or SR.Den).

Caves and overhangs in the littoral zone in hard rock and limestone (including chalk).