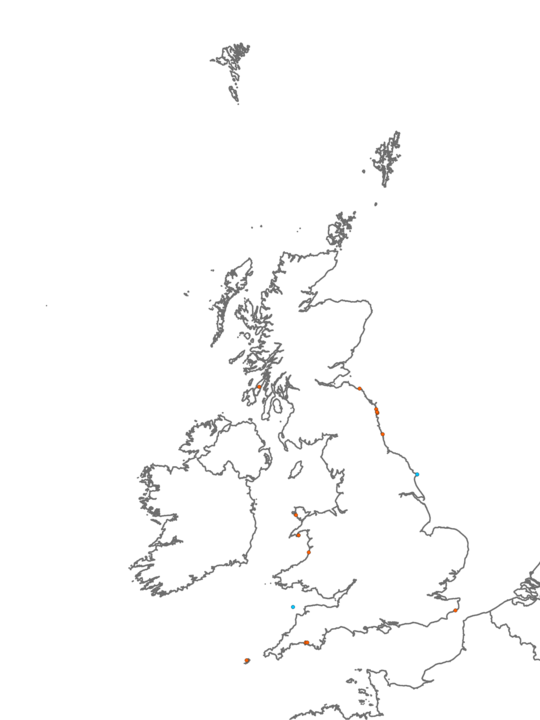 Overhanging bedrock on the lower shore, at cave entrances, to and on inner walls of caves, subject to wave surge and low light levels, and characterised by a high density of small groups of the solitary ascidian Dendrodoa grossularia. The sponges Grantia compressa, Halichondria panicea and Hymeniacidon perleve are common on the rock surface, while the hydroid Dynamena pumila (normally found on fucoids) hangs in distinct form from overhanging rock. Found on the rock surface are the calcareous tube-forming polychaetes Spirorbis spp. and Pomatoceros spp. along with the barnacles Semibalanus balanoides. The anemone Actinia equina thrives in the permanently damp pits and crevices. Where sufficient light is available a sparse community of shade-tolerant red seaweeds. These include Membranoptera alata, Lomentaria articulata, Audouinella spp. and coralline crusts.

This biotope is found on lower shore overhangs and on the entrances and inner walls of lower shore caves, and usually dominates the available habitat. It is generally found above the BarCv biotope and may extend to the upper walls of caves.

Some variation in the species composition of the individual caves must be expected depending on local conditions.

Occurs at localities with more available light. The ascidian Dendrodoa grossularia does not occur and red and brown seaweeds are usually present at higher frequency and at a higher abundance.

Occurs in similar physical conditions. SpByAs lacks the red seaweed community, except for a few individuals on the edge of overhangs. 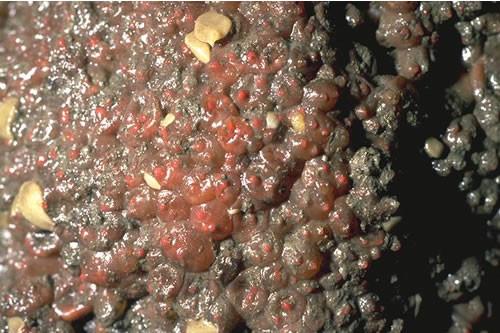