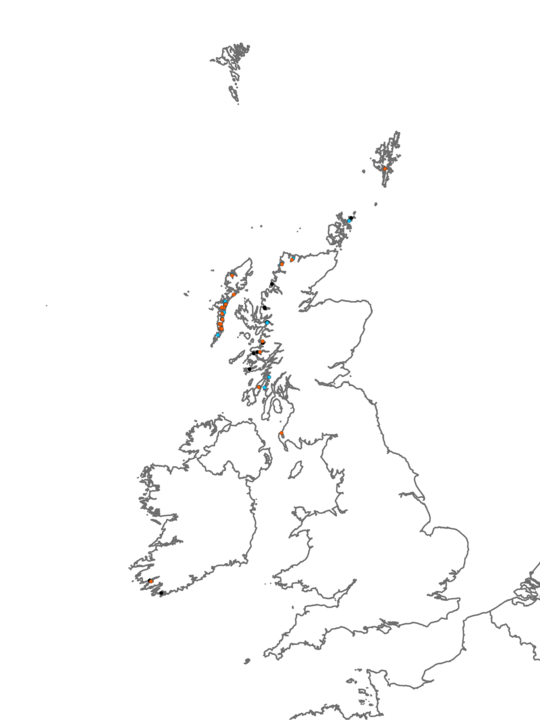 Cape-form of the kelp Laminaria hyperborea on very silted rock, particularly in extremely sheltered sealochs of western Scotland. Below the huge kelp fronds (which often trail onto the seabed) foliose seaweeds form a silted understorey on the rock including Phycodrys rubens, Delesseria sanguinea, Cryptopleura ramosa and Plocamium cartilagineum as well as coralline crusts. At some sites the filamentous red seaweed Bonnemaisonia hamifera, Heterosiphonia plumosa and Brongniartella byssoides may carpet the seabed. Ascidians, particularly Ascidiella aspersa, Ascidia mentula, Ciona intestinalis and Clavelina lepadiformis thrive well in these conditions. The echinoderms Antedon bifida, Echinus esculentus and Asterias rubens are often present along with the gastropod Gibbula cineraria. An abundant growth of the hydroid Obelia geniculata can cover the silted kelp fronds along with the bryozoan Membranipora membranacea. The anthozoan Caryophyllia smithii can be present among the kelp holdfasts. The tube-building polychaete Pomatoceros triqueter can be present on the rock surface along with the crab Necora puber. This biotope generally occurs on shallow bedrock or boulder slopes or isolated rocks protruding through muddy sediment.

This biotope is often present on rocky outcrops surrounded by muddy sediments (such as VirOphPmax). Deeper, nearby rock, beyond the limit of foliose seaweeds, is often dominated by solitary ascidians (AmenCio).

Occurs on moderately exposed rock and supports a dense understorey of foliose red seaweeds beneath the kelp canopy. L. hyperborea is not found in cape-form. A more diverse range of fauna such as sponges and anthozoans are also present in Lhyp.Ft.

Occurs in similar sheltered conditions but there are fewer species present in Lsac.Ft, particularly fewer red seaweeds and no L. hyperborea.