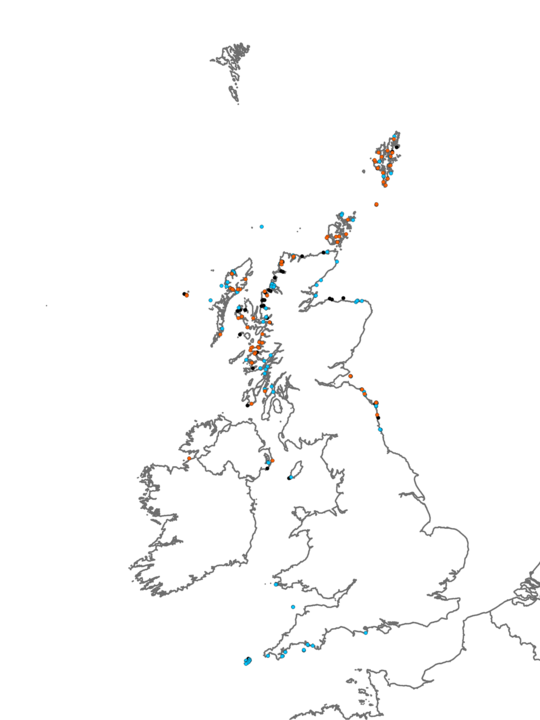 Exposed to moderately exposed Laminaria hyperborea kelp park in some areas is intensively grazed by the urchin Echinus esculentus. The rock surface lacks a significant turf of foliose seaweeds and generally looks bare, though coralline algal crusts and some grazing-resistant animals such as the tube-building polychaete Pomatoceros triqueter cover it. The kelp stipes may or may not be grazed; in the most extremely grazed areas, the stipes are also devoid of seaweeds. More usually, however, the stipes offers a refuge from grazing, and are characterised by dense turfs of red seaweeds, especially Phycodrys rubens and Delesseria sanguinea. Brown seaweeds present include Cutleria multifida, Laminaria saccharina and Dictyota dichotoma. The fauna within a grazed kelp park is also relatively sparse, though some species will survive in cracks and crevices or under boulders including the ascidian Clavelina lepadiformis. The encrusting bryozoan Parasmittina trispinosa and the anthozoans Alcyonium digitatum, Urticina felina and Caryophyllia smithii often characterise vertical or overhanging rock. Mobile species include the gastropods Gibbula cineraria and Calliostoma zizyphinum and the hermit crab Pagurus bernhardus The echinoderms Ophiocomina nigra, Ophiothrix fragilis and Crossaster papposus, generally absent from the kelp forest, can be found in these kelp parks along with Asterias rubens and Antedon bifida.

This biotope generally occurs below a grazed kelp forest (Lhyp.GzFt) but can also occur below ungrazed kelp forests on exposed sites where wave action can dislodge urchins from shallow rock. The grazed circalittoral biotope FaAlCr often occurs on the bedrock or boulders below.

Fluctuations in the numbers of E. esculentus may give foliose seaweeds a chance to re-grow periodically. Further information is required on the temporal variation within these grazed kelp parks and the changes in community structure when grazing pressure decreases.

Found above the kelp park and has a higher abundance of kelps but similar species composition to the park (Lhyp.GzPk).

Bare rock surfaces beneath the kelp canopy may also be caused by sand-scour and should not be confused with the barren appearance of a community decimated (reduced) by grazing. 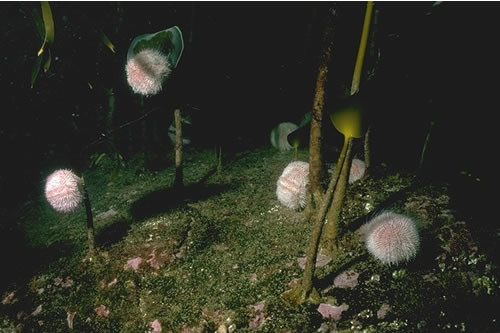 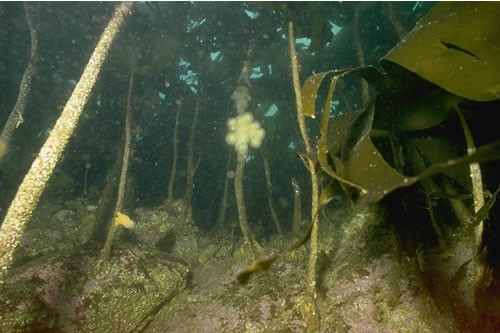