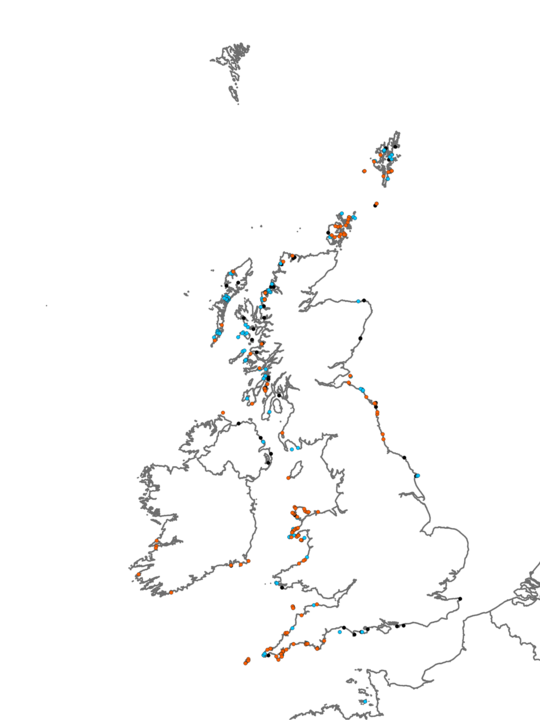 Bedrock and boulders, often in tide-swept areas, that are subject to scouring or periodic burial by sand, characterised by a canopy of mixed kelps such as Laminaria saccharina, Laminaria hyperborea and Saccorhiza polyschides and the brown seaweed Desmarestia aculeata; there may also be an understorey of foliose seaweeds that can withstand scour such as Plocamium cartilagineum, Chondrus crispus, Dilsea carnosa, Callophyllis laciniata as well as the filamentous Heterosiphonia plumosa and the foliose brown seaweed Dictyota dichotoma. The perennial red seaweed Brongniartella byssoides re-grows in the summer months. The L. hyperborea stipes often support a growth of epiphytes, such as Delesseria sanguinea, Phycodrys rubens and Cryptopleura ramosa. The scour can reduce the rock surface to bare coralline crusts at times; sponge crusts and the colonial ascidian Botryllus schlosseri can also grow on the stipes and holdfasts. The faunal diversity on the rock is usually low and restricted to robust, low-profile animals such as the tube-building polychaete Pomatoceros triqueter, the barnacle Balanus crenatus, encrusting bryozoans such as Membranipora membranacea, the anthozoan Urticina felina, the starfish Asterias rubens and the urchin Echinus esculentus. Deeper sites support more hydroids and bryozoans, particularly Bugula spp. Where this biotope occurs in very shallow water Laminaria digitata may be found in combination with the other kelp species. Other species present only in shallow water include the red algae Corallina officinalis and the sand-binding alga Rhodothamniella floridula.

This biotope often occurs below a L. hyperborea forest (LhypR.Ft, Lhyp.Ft or LhypT.Ft), close to a rock-sediment boundary. It is also found on low-lying rock outcrops surrounded by sand or mixed sediment and nearby biotopes on mixed substrata may include EphR, ProtAhn or in very shallow water LsacChoR. A Flustra foliacea community (FluCoAs) often dominates deeper sand-scoured circalittoral rock.

During late autumn and winter seaweeds are sparse, leaving predominantly kelp and encrusting coralline algae. This is due in part to periods of intense scouring during stormy months, which may strip off all but the most tenacious seaweeds. In addition there will be the natural die back of many of the seaweeds such as B. byssoides and C. ciliata during the winter months which become conspicuous again during the summer months.

A tide-swept biotope dominated by Halidrys siliquosa (typically greater than Common) with mixed kelp species that is subject to greater scour than XKScrR. 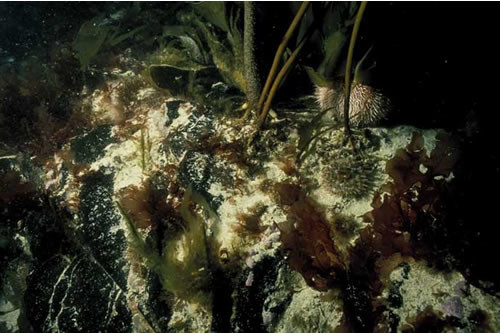