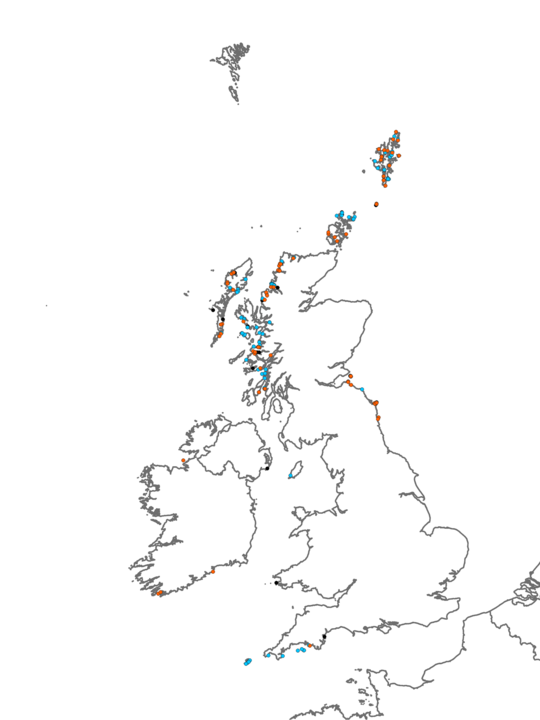 Exposed to moderately exposed Laminaria hyperborea forest is in some areas intensely grazed by the urchin Echinus esculentus. The rock surface lacks a significant turf of foliose seaweeds and generally looks bare, though encrusting algae cover the rock. In addition to these encrusting coralline algae, non-calcareous crusts such as Cruoria pellita and brown algal crusts also occur. The kelp stipes may or may not be grazed; in the most extremely grazed areas, the stipes are also devoid of seaweeds. More usually, however, the stipes offers a refuge from grazing, and are characterised by dense turfs of red seaweeds, especially Phycodrys rubens, Callophyllis laciniata, Plocamium cartilagineum and Delesseria sanguinea. The hydroid Obelia geniculata and the bryozoan Membranipora membranacea colonise the kelp fronds. On the rock itself certain brown seaweeds such as Cutleria multifida may persist in this grazed environment. Fast-growing species such as the kelp Laminaria saccharina may be present at sites recovering from grazing, opportunistically colonising the rock surfaces that have been cleared by grazing. The fauna within a grazed kelp forest is also relatively sparse and is mostly confined to cracks, crevices and under-boulders. Species such as the ascidian Clavelina lepadiformis can often be found on vertical rock. Also found on the rock surface are the anthozoans Urticina felina and Alcyonium digitatum. Encrusting species such as the tube-building polychaete Pomatoceros triqueter are resistant to grazing and may occur in abundance. The grazers present include the echinoderm Echinus esculentus and the gastropods Calliostoma zizyphinum and Gibbula cineraria. Other echinoderms present include Asterias rubens and Antedon bifida which can be abundant in the north-west. Moderate grazing occurs within many kelp forests; records should only be assigned to this biotope where the community has been intensively grazed leaving algal-encrusted rock with very few epilithic algae.

With increasing depth, the kelp forest grades into a grazed kelp park (Lhyp.GzPk), the lower limit of which is often abrupt, representing the balance point between urchin-grazing pressure and kelp growth capabilities. In wave-exposed steep rocky areas, the shallowest water may be characterised by a forest of kelp with red seaweeds (LhypR.Ft), with a grazed kelp forest beneath. This effect may be a result of the increased wave action in shallower water, which regularly dislodges the urchins thereby reducing their grazing impact. Lhyp.GzFt is prevalent in the north of the UK where E. esculentus populations reach high densities. Although E. esculentus is widely distributed around the UK it occurs in greatest abundance in Scotland and north-east England where urchin grazing can substantially affect infralittoral communities.

Fluctuations in E. esculentus numbers may give foliose seaweeds a chance to re-grow periodically. Further information is required on the temporal variation within these grazed forests and the changes in community structure when grazing pressure decreases.

Found beneath the kelp forest and has a lower abundance of kelps but similar species composition to kelp forest.

Bare rock surfaces beneath the kelp canopy may also be caused by sand-scour and should not be confused with the barren appearance of a community decimated (reduced) by grazing. 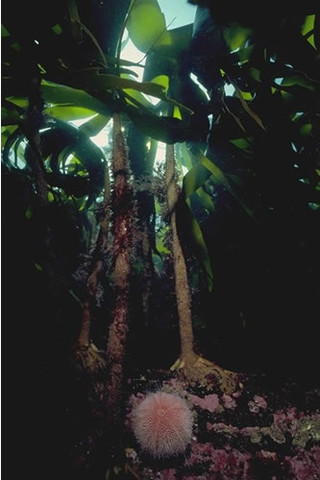 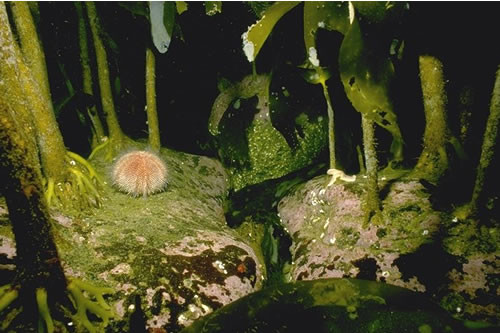