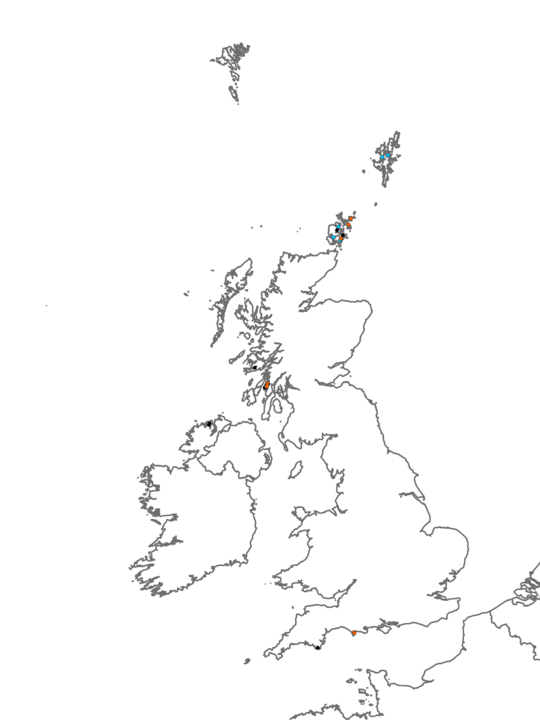 Very shallow, heavily-silted infralittoral rock characterised by dense stands of Codium spp., together with silt-tolerant red seaweeds, the green seaweed Ulva spp. and often only a sparse covering of the kelp Laminaria saccharina. This biotope appears to have a restricted distribution, being known at present only from the sheltered voes of Shetland, some Scottish lagoons and from the harbours of south-west England. These locations suggest the habitat is likely to be subject to reduced salinity conditions (although the habitat data indicate mostly fully marine records). Dense Codium spp. can occur at very sheltered sites, on cobbles or boulders, often in dense patches interspersed with filamentous red seaweeds Bonnemaisonia hamifera, Antithamnionella spirographidis and Ceramium spp. Where sediment is present the red seaweed Polyides rotundus is commonly found along the rock-sediment interface, and the sponge Dysidea fragilis often occurs on the rock. Other red seaweeds that may be present include Chondrus crispus, Callophyllis laciniata, Gelidium latifolium, Corallina officinalis and coralline crusts. The brown seaweeds Halidrys siliquosa, Desmarestia viridis or Chorda filum may be present in high abundance and although kelp L. saccharina may occur, it is usually sparse. There are no conspicuous fauna that typify this biotope, though polychaetes such as terebellids and spirorbids may occur. The opisthobranch Elysia viridis may be locally abundant on the seaweeds and is known to favour Codium fragilis in particular. Large stands of Codium sp. (generally Common abundance) are accompanied by red seaweeds such as G. latifolium, C. laciniata and A. spirographidis on the rock beneath. Cod has been reported to occur in the shallows of The Fleet, Bembridge Ledges, Pagham Harbour and Jersey (Tittley et al. 1985). In Ireland, species-poor shallow, silted bedrock in the North Water of Mulroy Bay, Co. Donegal, is characterised by Griffithsia corallinoides (Common) and Codium tomentosum (Frequent) forming a narrow band below the kelp zone (Lsac.Ft). Cod has not been described from any other sites in Ireland. If Codium spp. is less than Common amongst dense L. saccharina and Chorda filum, it should not be recorded as Cod.

This biotope occurs on bedrock below a sublittoral fringe of mixed kelp L. saccharina and Laminaria digitata (Lsac.Ldig) or below a L. saccharina forest (Lsac.Ft) or else on isolated boulders on sediment. It appears to be most frequently found in lagoons. Further information on which species of Codium is present and on the associated fauna is required.

In Cod L. saccharina is replaced in abundance by Codium spp.

Reduced salinity and lower diversity of red and brown seaweeds.

Dense Codium spp. can occur in the saline lagoons of Scotland amongst fucoids and C. filum. 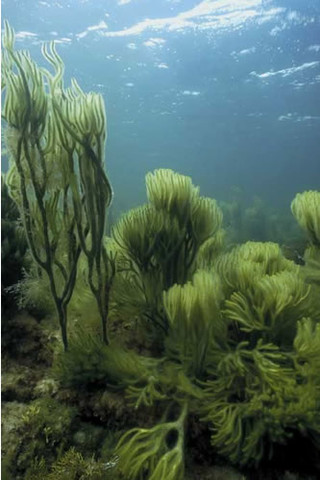