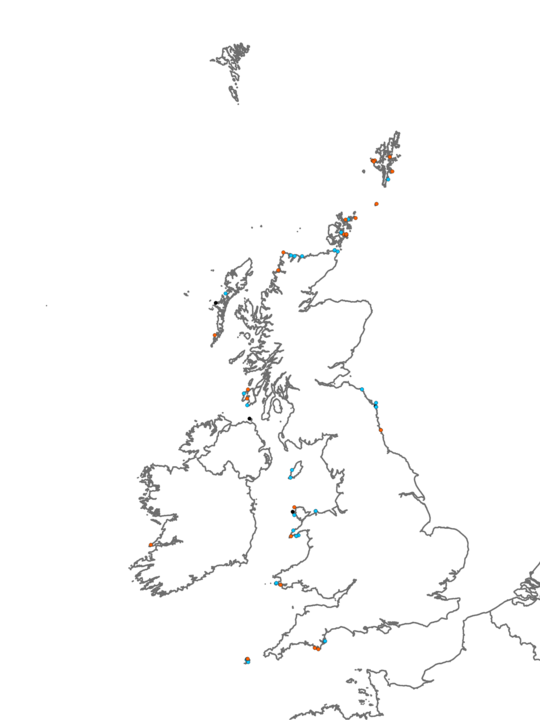 Vertical or overhanging infralittoral rock subject to considerable wave-surge, especially in the middle or back of caves but also in gullies and tunnels, and dominated by dense sheets of the ascidian Dendrodoa grossularia, together with variable quantities of the sponge Clathrina coriacea. At some sites D. grossularia forms continuous sheets, with few other species present. Other sponges such as Esperiopsis fucorum, Pachymatisma johnstonia, Leucosolenia botryoides, Scypha ciliata and Halichondria panicea regularly occur in this biotope, though generally at low abundance. Other ascidians, especially Polyclinum aurantium, Diplosoma spp. and other didemnids may also occur, though only P. aurantium is ever as abundant as D. grossularia. Being characteristically found in the middle or towards the backs of the caves mean that there is generally insufficient light to support any foliose seaweeds, although encrusting coralline algae are not uncommon. More scoured areas may also contain the anemone Urticina felina, whilst Sagartia elegans is often present in low numbers. Mobile fauna are often limited to the starfish Asterias rubens and Henricia spp., the brittlestar Ophiopholis aculeata and crabs Cancer pagurus and Necora puber. The barnacle Balanus crenatus can occur, usually in low densities.

Where this biotope develops in a cave or tunnel it can occur anywhere from the entrance to the rear of the system. Typically, it will give way to sponge crust or barnacle and encrusting tubeworm communities at the rear of the cave, where surge forces are amplified (CrSp or CC.BalPom). The vertical rock below the DenCla zone, abutting the cave/gully floor, is likely to be severely scoured, colonised by the robust CC.BalPom biotope. The cave or gully floor is generally scoured clean by boulders and/or cobbles (CC.Mo). The cave or gully entrance has more available light for algal growth so dense foliose seaweeds usually dominate the rock walls at the entrance, abutting the D. grossularia - C. coriacea zone further into the cave (FoSwCC). This dense seaweed growth may also extend to the upward-facing surfaces of boulders around the entrance. Where DenCla occurs in a gully situation, the rock tends to be colonised by dense Alaria esculenta in the sublittoral fringe (Ala) or by Laminaria hyperborea forest in the shallow infralittoral (LhypR.Ft). 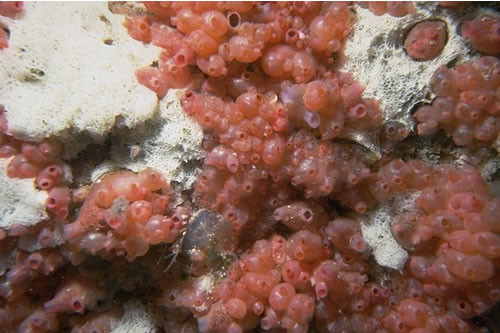 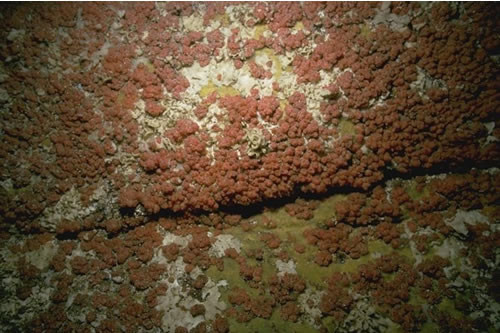 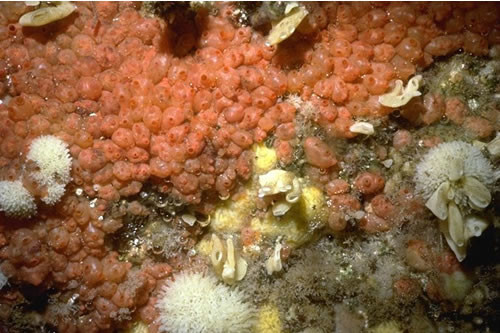