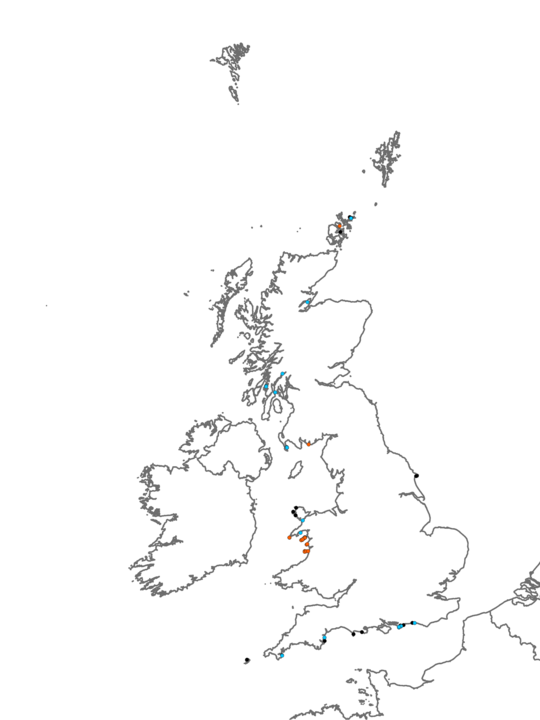 Seasonally disturbed unstable boulders and cobbles in very shallow water dominated by the fast-growing brown seaweed Chorda filum together with the kelp Laminaria saccharina. The brown seaweed Desmarestia aculeata is also typical of this disturbed environment as well encrusting coralline algae and brown crusts. Beneath the prolific growth of C. filum, red and brown seaweeds densely cover many of the boulders, cobbles and pebbles. Other sediment-tolerant seaweeds such as species from the Ectocarpales (brown filamentous seaweeds) and the red seaweeds Chondrus crispus, Phyllophora pseudoceranoides, Dilsea carnosa and Corallina officinalis is normally present. Other red seaweeds which can be found here include Chondria dasyphylla, Brongniartella byssoides, Polysiphonia elongata, Ceramium nodolosum, Cystoclonium purpureum, Heterosiphonia plumosa, Rhodomela confervoides and Plocamium cartilagineum. The brown seaweeds Punctaria sp. and Cladostephus spongiosus are generally present. The faunal component of this biotope is typically sparse - the starfish Asterias rubens and the crabs Pagurus bernhardus and Necora puber are amongst the most conspicuous animals. The bryozoan crust Electra pilosa colonise many of the algae along with the ascidian Botryllus schlosseri. Occasional the polychaete Lanice conchilega may occur in the sand between pebbles, and the anthozoan Urticina felina may be found amongst pockets of gravel along with the gastropod Gibbula cineraria. At some sites the rock beneath the algae can be occupied by the tube-building polychaete Pomatoceros triqueter. This biotope is also present at other open coast sites around the UK where suitable shallow, seasonally stable boulders, cobbles and pebbles occur. Typical examples of this biotope occur on the shallowest areas of the Sarns in Cardigan Bay, Wales, where reef crests are formed by embedded and mobile boulders, together with cobbles and pebbles in between (typically at 2-3m depth).

This biotope occurs in shallow water, often on the crest of an infralittoral boulder/cobble bank and as such will not have any biotope 'above' it. More mobile areas of smaller boulders, cobbles and pebbles nearby may support dense ephemeral red seaweeds (EphR) or robust scour-tolerant red seaweeds on sand-covered rock (ProtAhn). The Halidrys siliquosa biotope XKHal also thrives under similar conditions, extending deeper than the shallow LsacChoR biotope. Deeper still in the circalittoral zone encrusting fauna is found on highly mobile mixed substrata (PomB). At a few sites, this biotope can occur within more extensive maerl beds (SS.SMP.Mrl) but more commonly is surrounded by sandy sediments (SS.SSa).

This biotope will change markedly with the seasons. During the winter months boulders and cobbles will be storm battered and overturned and much of the biota dislodged from the rocks. During more stable conditions in the late spring and summer months the fast-growing seaweeds that characterise this biotope (C. filum and L. saccharina in particular) will be quick to re-establish, growing at a phenomenal rate. The seasonal disturbance of the substratum prevents a stable Laminaria hyperborea forest from developing.

Tide-swept biotope dominated by H. siliquosa (>Common) with mixed kelp species. Although C. filum may occur it is generally only Occasional.

Lacks the larger kelp and dense C. filum associated with LsacChoR and is generally found in deeper water (below 10m depth compared to LsacChoR usually above 5m depth).

Typically occurs on boulders, cobbles and pebbles in sheltered but tide-swept shallow water (such as found in tidal-rapids). L. saccharina is the dominant kelp, although L. hyperborea does occurs (Frequent). C. filum, when present is less dense (Common).