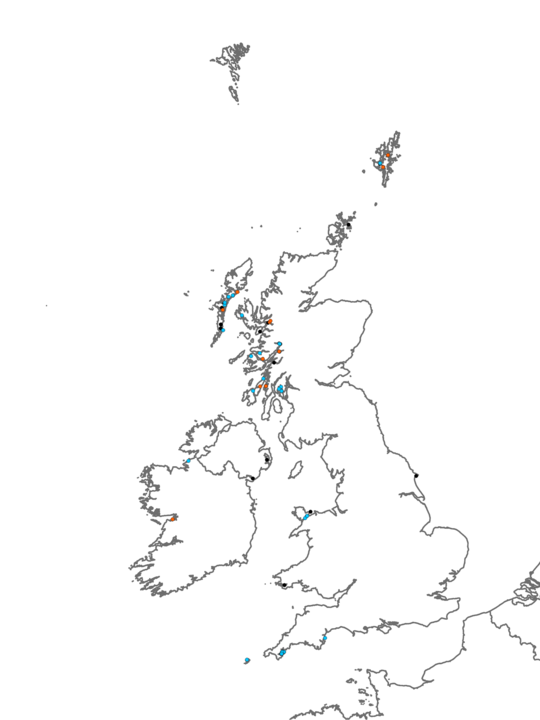 Mixed substrata of boulders, cobbles, pebbles and gravel, typically found in tidal rapids with kelp Laminaria saccharina and Laminaria hyperborea and red seaweeds. L. saccharina usually dominates this habitat although L. hyperborea may occur in equal abundance at some sites. The kelp in these tidal rapids does not form the same dense canopies associated with stable tide-swept bedrock, but generally occurs at lower abundance (Frequent). Other brown seaweeds occur in significant amounts in these tidal rapids including Dictyota dichotoma, Halidrys siliquosa and Chorda filum. These mixed substrata support a greater diversity of species than scoured bedrock narrows (XKT). In particular, there is an increase in red algal species such as Corallina officinalis, Bonnemaisonia hamifera and Ceramium nodulosum, although none occur in any great abundance. Red seaweeds common to both XKT and this biotope include Chondrus crispus, Delesseria sanguinea, Plocamium cartilagineum and Phycodrys rubens. Good examples of this biotope often have maerl gravel (Lithothamnion sp.) or rhodoliths between cobbles and boulders. Where maerl dominates, the biotope should be recorded as a maerl bed (SS.SMP.Mrl). The sponges associated with more stable, tide-swept conditions are generally absent, but the anthozoan Anemonia viridis might be present. Cobbles and pebbles are encrusted by the ubiquitous polychaete Pomatoceros triqueter and provide shelter for scavenging crabs such as Carcinus maenas and the hermit crab Pagurus bernhardus, gastropods such as Gibbula cineraria and echinoderms such as Echinus esculentus, Asterias rubens, Ophiocomina nigra and Ophiothrix fragilis which favour these sites of increased water movement. Additional infaunal species, inhabiting the sediment pockets, include Lanice conchilega and Sabella pavonina, which can be locally abundant.

Where stable rock fringes the shallows the tide-swept Laminaria digitata biotope often occurs (LdigT). Adjacent areas of stable bedrock or boulders in these sheltered, tide-swept narrows can support a similar kelp community, often with a greater percentage of L. hyperborea (XKT). Maerl fragments are often found amongst the mixed substrata of XKTX and this biotope may abut more extensive areas of maerl bed (Phy & Lgla).

This biotope occurs on the open coast in deeper water.

Stable, tide-swept rock in the sheltered narrows and sills of Scottish sealochs, characterised by a dense kelp forest of L. hyperborea (Common) and/or Laminaria saccharina (Frequent) on scoured, coralline-encrusted rock. The brown seaweed Chorda filum is not present. Filterfeeders like the sponge Halichondria panicea, hydroids (Obelia geniculata) and anthozoans like Urticina felina and Sargartia elegans are present (Frequent-Occasional) due to the more stable substrata of this biotope compared to XKTX.