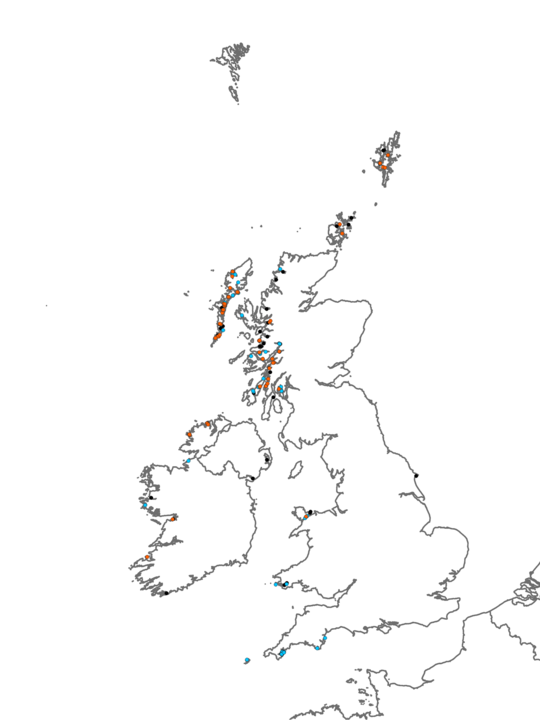 Stable, tide-swept rock characterised by dense kelp Laminaria hyperborea and/or Laminaria saccharina forest on scoured, coralline-encrusted rock. This biotope occurs in the sheltered narrows and sills of Scottish sealochs, where there is an increase in tidal flow. Although L. hyperborea (typically Common) generally occurs in greater abundance than L. saccharina (Frequent), either kelp may dominate, sometimes to the exclusion of the other. (This biotope should not be confused with sheltered, but silted LhypLsac). Large stands of the brown seaweed Halidrys siliquosa may also occur amongst the kelp along with Dictyota dichotoma on bedrock and boulders. In contrast to the scoured rock surface the kelp stipes themselves often support prolific growths of foliose red seaweeds such as Phycodrys rubens, Membranoptera alata, Delesseria sanguinea and Plocamium cartilagineum. Other foliose seaweeds may be present among the kelp holdfasts include Chondrus crispus and Dilsea carnosa. The scoured rock surface is characterised by encrusting coralline algae, barnacles Balanus crenatus and the tube-building polychaete Pomatoceros triqueter. The sponge Halichondria panicea, anthozoans Urticina felina, Anemonia viridis and Sagartia elegans can also occur on the scoured rock. Sponges, particularly Halichondria panicea and colonial and solitary ascidians Botryllus schlosseri and Ascidiella aspersa encrust the stipes, whilst hydroid growth of Obelia geniculata and seamats Membranoptera membranacea can cover the fronds, optimising the increased tidal flow. Mobile species such as the gastropod Gibbula cineraria can often be found on and around the kelp. The echinoderms Asterias rubens, Ophiothrix fragilis and Echinus esculentus can be found underneath the kelp canopy on the rock along with the crab Carcinus maenas. Where some protection is afforded from the scour anthozoans may occur on the rock such as Alcyonium digitatum or Metridium senile.

This biotope may be fringed by tide-swept kelp Laminaria digitata in shallower water (LdigT). Where mixed substrata occurs adjacent to the stable bedrock and boulders the kelp will usually diminish in density (typically Frequent), but a greater diversity of species will be found compared to the scoured bedrock, in particular there is an increase in red seaweeds and a greater infaunal component (XKTX). Maerl rhodoliths may be present amongst the bedrock and boulders of XKT in small amounts, and at some sites may form extensive beds surrounding the bedrock outcrops (Phy.R and Lgla).

Tide-swept rock on the open coast supports a similar community of L. hyperborea kelp forest. LhypT.Ft generally occurs at a greater depth (6-10m below chart datum compared to the shallow XKT, which is generally above 5m chart datum). The kelp composition in XKT is generally mixed compared to the dense monospecific L. hyperborea canopy of LhypT.Ft. The faunal composition differs with a higher diversity of sponges and anthozoans in the open coast sites, which lack the often dense aggregations of solitary ascidians that occur at the sheltered, shallow sites of XKT.

Tidal rapids with a higher percentage of mixed substrata which support a higher abundance of red algae like Lithothamnion spp. and L. graciale but also the brown seaweed Chorda filum is present. Filterfeeders like the sponge Halichondria panicea, hydroids (Obelia geniculata) and anthozoans like Urticina felina and Sargartia elegans are usually absent due to the more unstable substrata of this biotope compared to XKT.

Occurs on the open, more exposed coast and is not tide-swept.