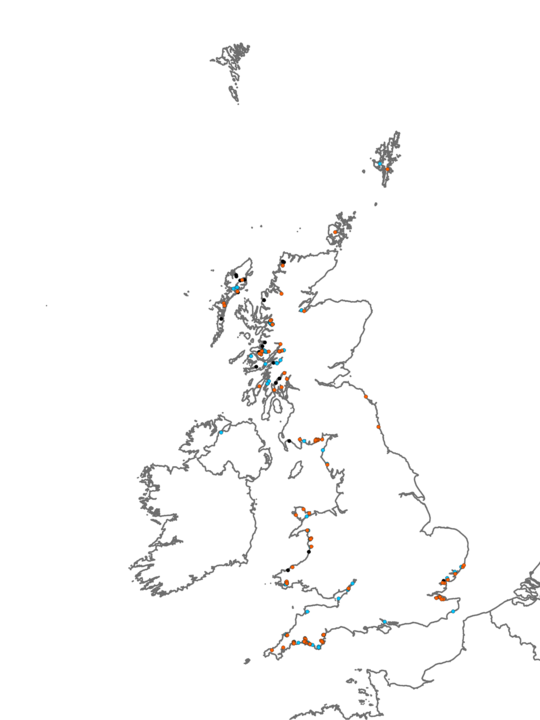 Very sheltered to extremely sheltered mid eulittoral bedrock, boulders or cobbles subject to variable salinity characterised by an impoverished community dominated by a mixture of the wracks Ascophyllum nodosum and Fucus vesiculosus. Underneath the canopy are a few green seaweeds including Enteromorpha intestinalis and Cladophora spp., while the red seaweed Polysiphonia lanosa can be found as an epiphyte on A. nodosum. On the rock and among the boulders are the winkles Littorina littorea and Littorina saxatilis, the crab Carcinus maenas, the barnacles Semibalanus balanoides and Elminius modestus and even the occasional mussel Mytilus edulis. Among the seaweeds and underneath the boulders a variety of gammarids can be found.

This biotope usually lies below the Fucus spiralis biotope (Fspi.VS) or the Fucus ceranoides dominated biotopes (Fcer) and above the variable salinity F. serratus dominated biotope (Fserr.VS), although on some shores a narrow zone of F. vesiculosus (Fves) may occur immediately above the A. nodosum. With increasing wave exposure the A. nodosum canopy can be more dense (Asc.FS).

A. nodosum can reach an age of 25 years and the communities are usually stable. F. vesiculosus or F. serratus can occur in patches where the A. nodosum has been removed.

Occurs on bedrock in full salinity. This biotope has higher species diversity and species such as the red coralline crusts and the foliose red seaweed Chondrus crispus, the whelk Nucella lapillus and anemone Actinia equina are usually present.

Occurs on bedrock or mixed substrata with strong tidal streams. High diversity of filter-feeders including the sponges Leucosolenia spp. and Grantia compressa, the hydroid Clava multicornis and the sea squirt Dendrodoa grossularia.