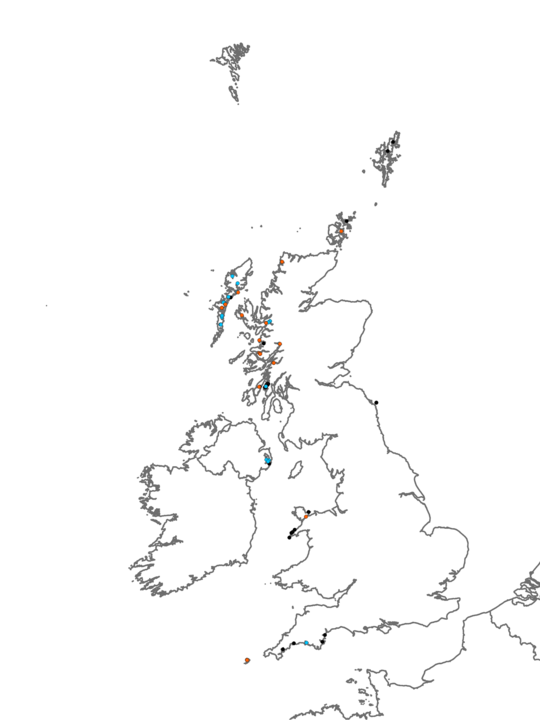 Very sheltered to extremely sheltered areas of mid eulittoral rock that are subject to strong to moderate tidal streams, such as the narrows in sea lochs, and characterised by the wrack Ascophyllum nodosum. The wracks Fucus vesiculosus and Fucus serratus are occasionally present. The increased water movement encourages a rich associated fauna including several filter-feeding groups. These include the sponges Leucosolenia spp., Grantia compressa, Halichondria panicea and Hymeniacidon perleve which frequently occur on steep and overhanging faces of boulders and bedrock. It also includes the sea squirts Dendrodoa grossularia and Ascidiella scabra, which occur on steep surfaces and beneath boulders. Hydroids such as the pink Clava multicornis can form colonies on A. nodosum while Dynamena pumila is more often found on F. vesiculosus or F. serratus. Underneath the canopy formed by the brown seaweeds is a diverse community of the red seaweeds Gelidium pusillum, Chondrus crispus, Lomentaria articulata, Membranoptera alata and coralline crusts, but the green seaweeds Enteromorpha intestinalis, Ulva lactuca and Cladophora rupestris can be present. The filamentous red seaweed Polysiphonia lanosa can usually be found growing on A. nodosum. On the rock beneath are the limpet Patella vulgata and the barnacle Semibalanus balanoides, while the crab Carcinus maenas and a variety of winkles including Littorina littorea, Littorina mariae and Littorina obtusata can be found on or among the boulders. The whelk Nucella lapillus can either be found in cracks and crevices or preying on the barnacles.

This biotope occurs lower on the shore than the Fucus spiralis biotope (Fspi) although on some shores a narrow zone of F. vesiculosus (Fves) may occur immediately above the A. nodosum. Asc.T is found above the tide-swept F. serratus dominated biotope (Fserr.T).

A. nodosum can reach an age of 25 years and the communities are usually very stable. F. vesiculosus or F. serratus can occur in patches where the A. nodosum has been removed.

Occurs on bedrock with weak tidal streams. Lower diversity of filter feeders and lacks species such as the sponges Leucosolenia spp. and G. compressa, the hydroid C. multicornis or the sea squirt D. grossularia .

Occurs on bedrock or mixed substrata with variable salinity. Coralline crusts and C. crispus, N. lapillus and anemone Actinia equina are not usually present in this species impoverished biotope. It is also lacks the filter feeders mentioned above.

Occurs on mixed substrata in fully marine conditions. Has a lower abundance and diversity of red seaweeds and lacks species such as Leucosolenia spp. and G. compressa, the hydroid C. multicornis and the sea squirt D. grossularia. 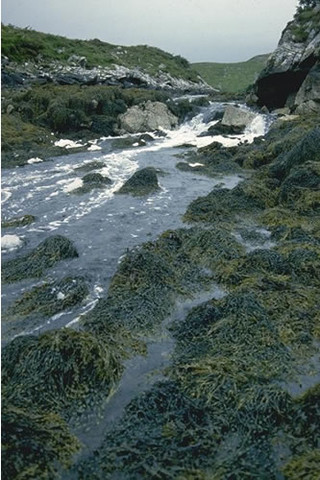 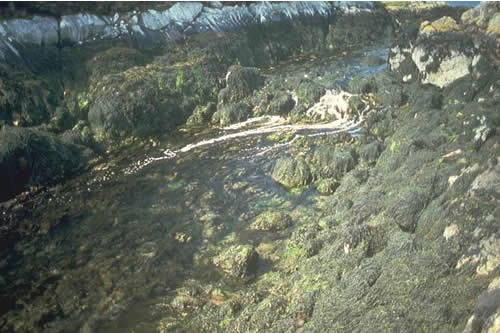 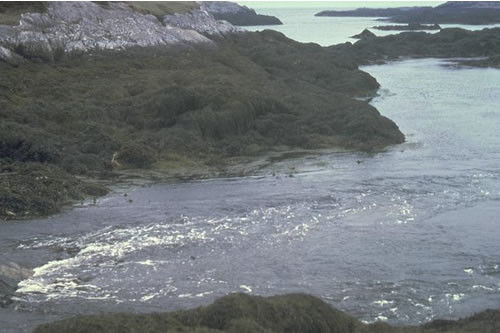