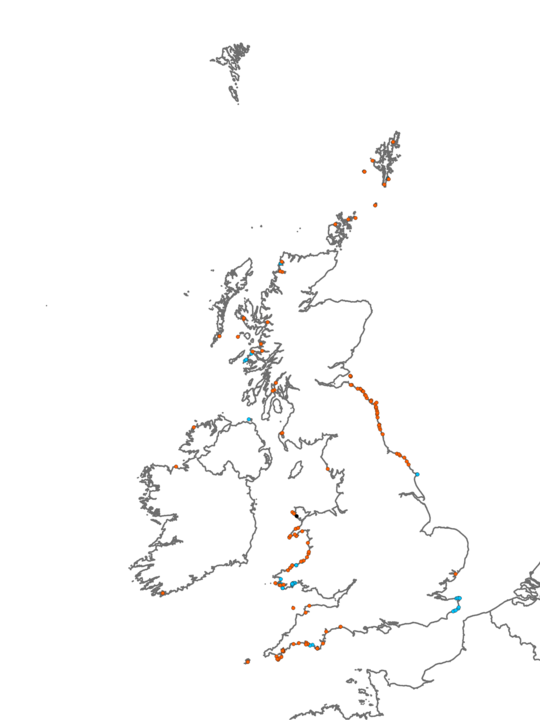 Shallow and smaller rockpools throughout the eulittoral zone in a wide range of wave exposures characterised by a covering of encrusting coralline algae on which Corallina officinalis often forms a dense turf. The bottom of these pools can be covered in coarse gravel and cobbles. These 'coralline' pools have a striking appearance as they are dominated by red seaweeds. Foliose red seaweeds found in these pools include Mastocarpus stellatus, Chondrus crispus and the filamentous Ceramium nodulosum. The ephemeral green seaweeds Cladophora rupestris, Ulva lactuca and Enteromorpha spp. can also occur in high abundance. The pools may hold large numbers of grazing molluscs, particularly the winkle Littorina littorea (which often occurs in exceptionally high densities in upper shore pools), the limpet Patella vulgata and top shell Gibbula cineraria. Gastropods may graze these pools to such an extent that they is devoid of any foliose red seaweeds, and the flora are reduced to encrusting coralline algae and large numbers of gastropods. Large brown seaweeds are generally absent. Within the pools, pits and crevices are often occupied by the anemone Actinia equina and small individuals of the mussel Mytilus edulis, while the barnacle Semibalanus balanoides can be found on the rock surface. The whelk Nucella lapillus can be found on the rock surface preying on the barnacles and mussels.

Rockpools throughout the eulittoral and lower littoral fringe rocky shores.

Occurs in similar physical conditions though mostly on exposed to very exposed shores (and it is only reported from Ireland). It has a higher species richness and is dominated by P. lividus though the anemone Anemonia viridis can also be present.

Occurs in similar physical conditions. The brown seaweed Bifurcaria bifurcata dominates this biotope. The diversity of red seaweeds is higher and includes species such as Palmaria palmata and Gastroclonium ovatum.

Similar sized pools in the littoral fringe generally lack the encrusting coralline algae and are characterised by green seaweeds such as Enteromorpha intestinalis. 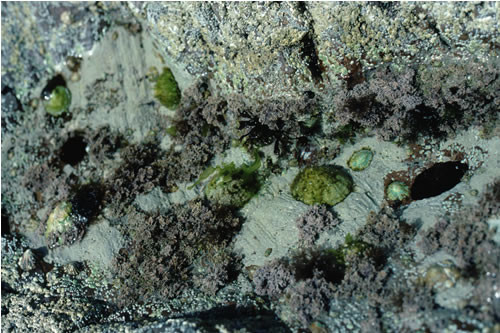 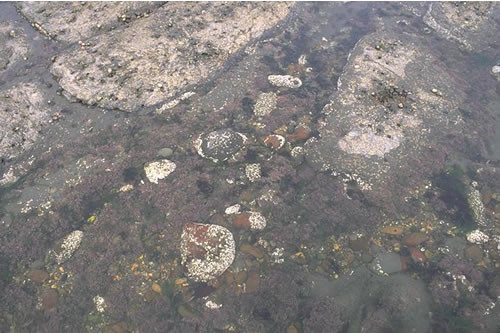