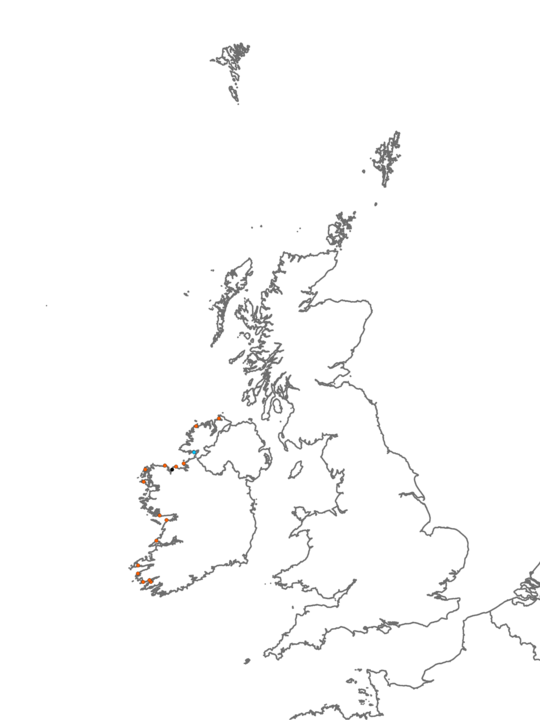 Shallow and relatively smal rockpools throughout the eulittoral zone on very exposed to exposed shores, characterised by a covering of encrusting coralline algae on which Corallina officinalis forms a dense turf. The bottom of these pools can be covered in coarse gravel and cobbles. In south and west Ireland these coralline pools may be dominated by the sea urchin Paracentrotus lividus and the seaweed diversity is generally low due to the grazing pressure of P. lividus, the top shells Gibbula cineraria and Gibbula umbilicalis, and winkles such as Littorina littorea. Within the pools, pits and crevices are often occupied by the anemone such as Actinia equina and Anemonia viridis and small individuals of the mussel Mytilus edulis. The siphonous green seaweed Codium spp. can also be present along with the wrack Himanthalia elongata and the brown seaweed Leathesia difformis and the filamentous red seaweed Ceramium spp. The barnacle Semibalanus balanoides is either absent or occurs at low abundance in these rockpools, presumably due to the grazing pressure on the larval stage and the predation pressure from the whelk Nucella lapillus. Soft bedrock, such as limestone, allows P. lividus to bore into the rock.

Rockpools throughout the eulittoral and lower littoral fringe in bedrock on very exposed to exposed shores.

Occurs in similar physical conditions over a wide range of wave exposures. P. lividus is not present and foliose red seaweeds such as Mastocarpus stellatus and Chondrus crispus can be present.

Occurs in similar physical conditions. The brown seaweed Bifurcaria bifurcata dominate this biotope. The diversity of red seaweeds is higher, and includes species such as Palmaria palmata and Gastroclonium ovatum.