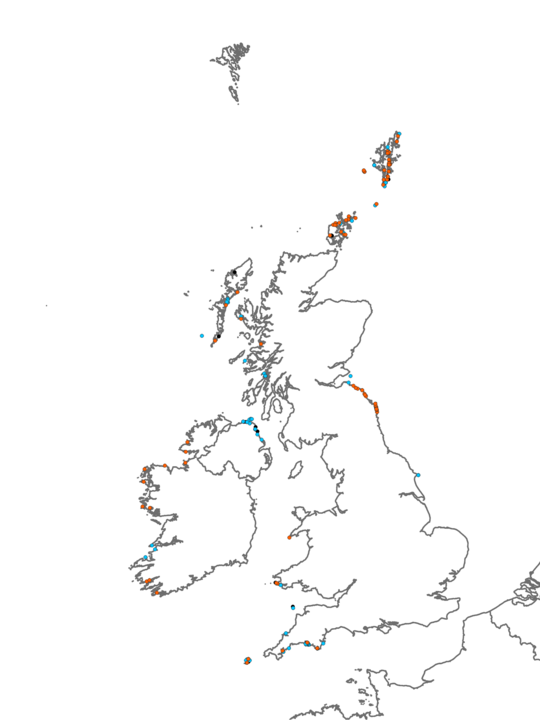 Exposed to moderately exposed lower eulittoral bedrock characterised by the wrack Himanthalia elongata with a dense turf of red seaweeds beneath. H. elongata may occur on tide-swept, sheltered shores in sea lochs (e.g. Loch Maddy). The wrack Fucus serratus is normally present as well. The predominant red seaweeds are usually Mastocarpus stellatus, Osmundea pinnatifida, Corallina officinalis and Palmaria palmata that tend to grow over a crust of the pink coralline algae Lithothamnion spp. Any patches between the algal turf may be colonised by barnacles Semibalanus balanoides, or Balanus perforatus in the south-west, and by the limpet Patella vulgata. Pits and crevices in the rock often provide a refuge for the whelk Nucella lapillus, the winkle Littorina spp. and small individuals of the mussel Mytilus edulis. Besides the dominant seaweeds there are a number of other red, brown and green seaweeds present. These include species such as the red seaweeds Dumontia contorta, Lomentaria articulata, Porphyra spp., the kelp Laminaria digitata and the green seaweeds Enteromorpha intestinalis, Ulva lactuca and Cladophora rupestris.

On some shores this biotope may occur as a distinct zone between a Fucus serratus and red algal turf (Fser.R) and the kelp Alaria esculenta and L. digitata community (Ala.Ldig). This biotope generally characterises those shores which are too exposed for F. serratus to form a dense canopy, often occurring as large patches within the F. serratus / red seaweed turf zone (Fser.R). Consequently, F. serratus plants frequently occur amongst the H. elongata and red seaweed turf.

In early spring only characteristic H. elongata buttons are present, while the long erect parts of the thalli appears later in the season. This biotope may therefore appear very similar to Coff.Coff biotope in the spring and care should be taken when assessing these biotopes in early spring (See Similar biotopes).

Occurs in the lower eulittoral zone on exposed to moderately exposed shores. C. officinalis dominates instead of H. elongata and the limpet Patella ulyssiponensis can be common. The species richness of red seaweeds are higher, while kelp such as Alaria esculenta and wracks such as Fucus spp. are not as common if present at all.

Occurs on very exposed to exposed shores. The limpet P. ulyssiponensis and sponges such as Grantia compressa and Hymeniacidon perleve are present. Also the barnacles Chthamalus stellatus and Balanus perforatus are present and C. officinalis occur at higher abundance (Common). H. elongata can still be present at high abundance (Abundant. ) 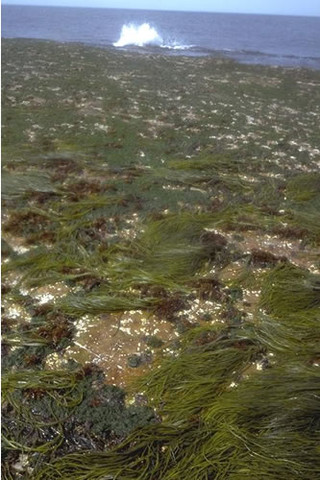 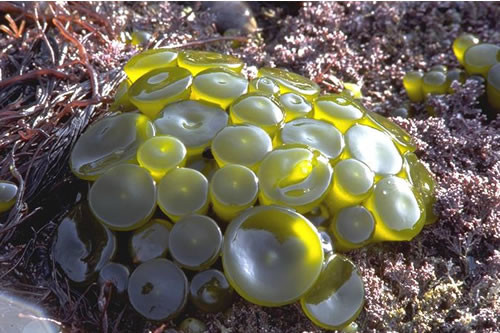 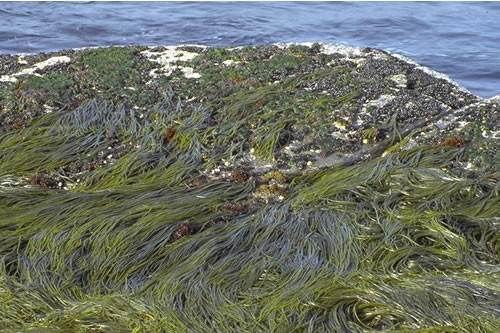