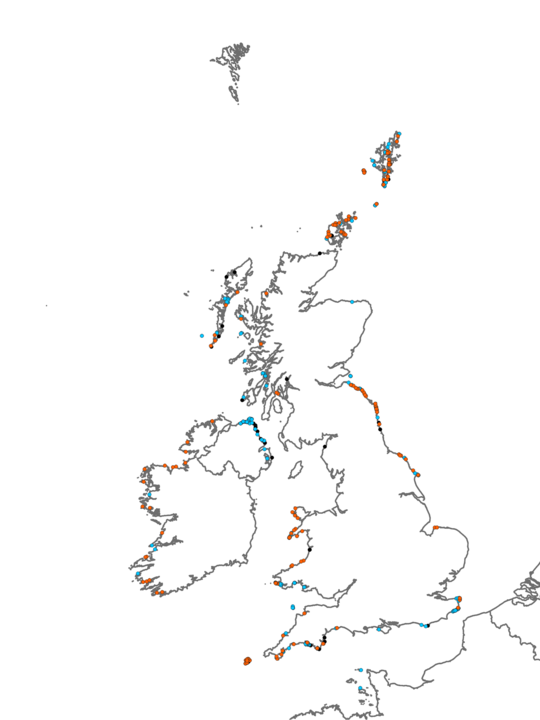 This biotope complex encompasses those seaweeds that are able to tolerate the extreme conditions of very exposed to moderately exposed rocky shores. The physical stresses caused by wave action often results in dwarf forms of the individual seaweeds. The strong holdfasts and short tufts structure of the wracks Fucus distichus and Fucus spiralis f. nana allow these fucoids to survive on extremely exposed shores in the north and north-west (Fdis). Another seaweed able to tolerate the wave-wash is the red seaweed Corallina officinalis, which can form a dense turf on the mid to lower shore (Coff). The wrack Himanthalia elongata occurs on the lower shore and can extend on to moderately exposed shores (Him). The red seaweed Mastocarpus stellatus is common on both exposed and moderately exposed shores, where it may form a dense turf (particularly on vertical or overhanging rock faces, Mas). Very exposed to moderately exposed lower eulittoral rock can support a pure stand of the red seaweed Palmaria palmata. It is found either as a dense band or in large patches above the main sublittoral fringe (Pal). Exposed to moderately exposed lower eulittoral rock characterised by extensive areas or a distinct band of Osmundea pinnatifida (Osm). Outcrops of fossilised peat in the eulittoral are soft enough to allow a variety of piddocks, such as Barnea candida and Petricola pholadiformis, to bore into them (RPid). This biotope is rare. Other species such as the anemone Halichondria panicea, the barnacle Semibalanus balanoides, the limpet Patella vulgata, the mussel Mytilus edulis and the whelk Nucella lapillus can be present as well, but they are never dominant as in the MusB-complex. There is also a higher number of seaweeds present including the red Palmaria palmata, Lomentaria articulata, Ceramium spp. and the brown seaweeds Laminaria digitata and Fucus serratus. The green seaweeds Enteromorpha intestinalis, Ulva lactuca and Cladophora rupestris are occasionally present.

This biotope complex is present on extremely exposed to moderately exposed upper to lower shores.