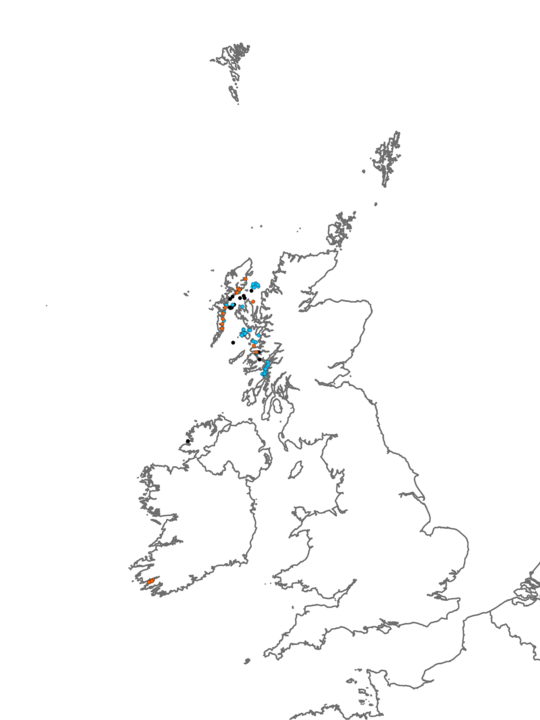 This biotope is typically found on the upper and vertical faces of very exposed through to wave-sheltered circalittoral bedrock and boulders, which are typically subject to weak tidal streams. It is characterised by dense aggregations of the cup coral Caryophyllia smithii and the sea fan Swiftia pallida on the silty substratum. Under the silt, bryozoan crusts such as Parasmittina trispinosa and encrusting red algae may be seen. This biotope may have a grazed appearance, perhaps attributable to the frequently occurring Echinus esculentus. There may be a sparse hydroid turf present, with species such as Nemertesia antennina, Nemertesia ramosa and Halecium halecinum present. The soft corals Alcyonium glomeratum and Alcyonium digitatum may be present on the tops of boulders along with the crinoids Antedon petasus and Antedon bifida. Other echinoderms occasionally observed include the starfish Marthasterias glacialis, Asterias rubens and Luidia ciliaris. Sponges feature only occasionally in this biotope, including species such as Cliona celata. The bryozoan Porella compressa may also be recorded. Ascidians occasionally present include Ascidia mentula, Clavelina lepadiformis and Ciona intestinalis. Under-boulder fauna typically consists of the crustacean Munida rugosa. The polychaete Spirobranchus triqueter may be seen encrusting the rocky surface. Two variants of this biotope have been identified; CarSwi.Aglo and CarSwi.LgAs. CarSwi.Aglo is a heavily silted biotope characterised by the sea fan S. pallida, the cup coral C. smithii and the soft coral A. glomeratum and is only present in Irish waters. CarSwi.LgAs has been recorded off the west coast of Scotland, and is characterised by large solitary ascidians and the cup coral C. smithii.