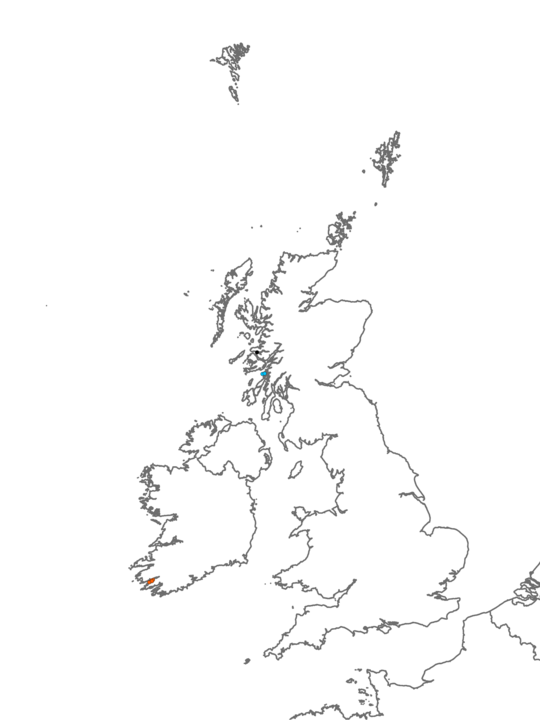 This variant typically occurs on sheltered, ridged, circalittoral bedrock or boulders subject to only weak tidal streams, but may be found in somewhat more exposed conditions. It is found in water depths ranging from 15m to 32m. Commonly occurring Swiftia pallida characterises this heavily silted biotope along with Caryophyllia smithii and frequent Alcyonium glomeratum. Under the silt, bryozoan crusts such as Parasmittina trispinosa may be found. There is a strong echinoderm component to the community, with the tentacles of Aslia lefevrei frequently seen protruding from crevices in the ridged bedrock. Holothuria forskali is often seen on the upper faces of boulders and bedrock. Marthasterias glacialis, Asterias rubens, Echinus esculentus, Henricia oculata and Luidia ciliaris may also be present. A sparse hydroid turf may also be present, with species such as Polyplumaria frutescens, Halecium halecinum and Nemertesia antennina. In addition, there may be anthozoans such as Isozoanthus sulcatus and Corynactis viridis. The sponge Suberites carnosus is typically associated with a heavily silted habitat. Other sponges present include Cliona celata, Stelligera stuposa and Polymastia boletiformis. The only records are from the west coast of Ireland.

Usually found on bedrock ridges and outcrops surrounded by sand and muddy gravel.

This biotope is found over a broad range of sites with different wave-exposures, subject to moderately strong to very weak tidal streams. The substratum is typically similar to CarSwi.Aglo, but CarSwi.LgAs has a lower diversity of sponges and hydroids.

This biotope occurs in slightly more wave-exposed and more tide-swept sites than CarSwi.Aglo. They both occur across similar depth bands. SwiLgAs appears a lot more biologically diverse, with a greater range of sponges, hydroids, bryozoans and ascidians.