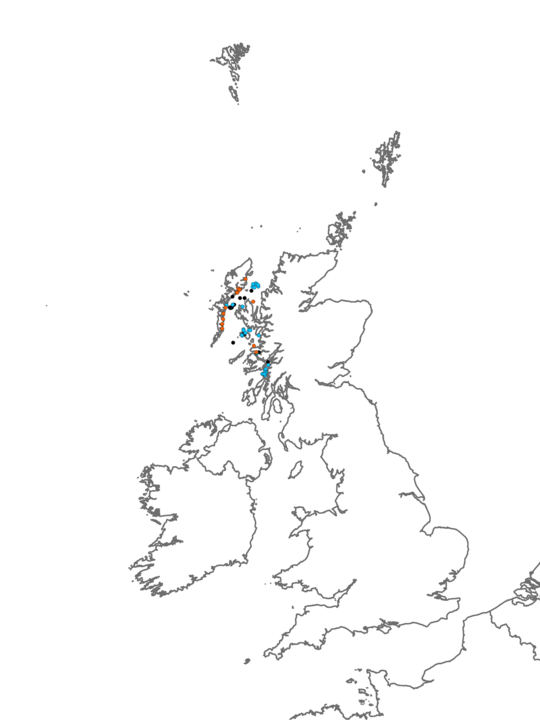 This variant typically occurs on exposed to moderately wave-exposed, circalittoral bedrock and boulders rock subject to mainly weak tidal streams and has a thin layer of silt present. It is found predominantly from 10-30m water depth. From afar, this biotope is mostly distinguished by the frequently occurring seafan Swiftia pallida, encrusting red algae and the abundant cup coral Caryophyllia smithii. This biotope has quite an impoverished appearance, compared with SwiLgAs which has a strong sponge component. Other species present are typically in low abundance. Echinoderms such as Echinus esculentus, Antedon bifida, Antedon petasus, Leptometra celtica, Marthasterias glacialis, Luidia ciliaris and Asterias rubens may be recorded. Large hydroids such as Nemertesia antennina and Nemertesia ramosa may occasionally be seen in isolated clumps on the tops of boulders and rocky outcrops. The anthozoan Parazoanthus anguicomus may be recorded. Bryozoans such as Parasmittina trispinosa and Porella compressa are occasionally observed. The polychaete Pomatoceros triqueter may be observed encrusting the sides of rocks and boulders while occasional Alcyonium digitatum may also be seen. A small suite of large ascidians may be present, including Ascidia mentula, Clavelina lepadiformis, Ciona intestinalis, Diazona violacea and Ascidia virginea. Sponges are typically absent from this biotope, although Cliona celata may be recorded occasionally. The top shell Gibbula cineraria is usually present. Under boulders and overhangs, the squat lobster Munida rugosa can usually be seen hiding. All these records are from the west coast of Scotland (East coast of Lewis /Outer Hebrides).

Above this biotope in the infralittoral zone, sheltered kelp forests are usually found, with species such as Laminaria hyperborea, Laminaria saccharina and Sacchoriza polyschides. This biotope is found on bedrock and boulders, which may either be protruding from the surrounding sediment, or the sediment may be in a separate zone below the bedrock. These sediments may either be deep mud (with species such as Pachycerianthus and Nephrops ) on the sheltered sites or slightly coarser sediments (with Pennatula and Virgularia) on slightly more exposed sites.

This biotope occurs in slightly more tide-swept sites than CarSwi.LgAs. They both occur across similar depth bands. SwiLgAs appears a lot more biologically diverse, with a greater range of sponges, hydroids, bryozoans and ascidians, although this difference may possibly be due to poor data.

This biotope predominantly occurs in the sheltered end of the wave-exposure spectrum, subject to only weak tidal streams. It is typically found across similar depth bands as CarSwi.LgAs. This heavily silted biotope is characterised by Swiftia pallida, Alcyonium glomeratum, Isozoanthus sulcatus and the prominent Holothuria forskali. This biotope is only present around the coast of Ireland. 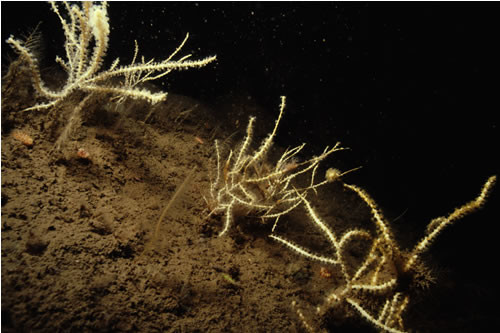