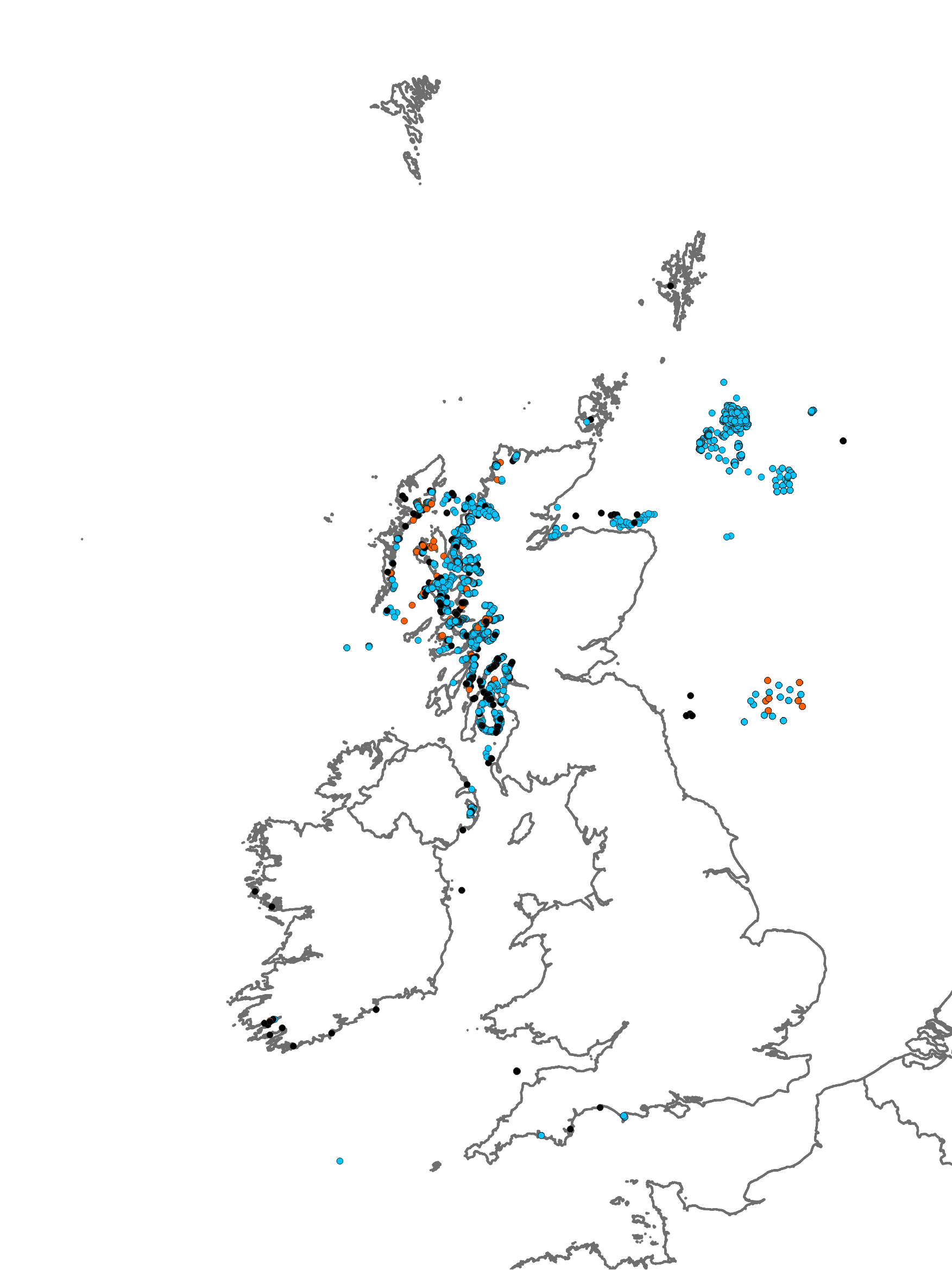 Plains of fine mud at depths greater than about 15 m may be heavily bioturbated by burrowing megafauna; burrows and mounds may form a prominent feature of the sediment surface with conspicuous populations of seapens, typically Virgularia mirabilis and Pennatula phosphorea. The burrowing crustacea present typically include Nephrops norvegicus, which is frequently recorded from surface observations although grab sampling may fail to sample this species. Indeed, some forms of sampling may also fail to indicate seapens as characterising species. This biotope also seems to occur in deep offshore waters in the North Sea and the Irish Sea. The burrowing anemone Cerianthus lloydii and the ubiquitous epibenthic scavengers Asterias rubens, Pagurus bernhardus and Liocarcinus depurator are present in low numbers in this biotope whilst the brittlestars Ophiura albida and Ophiura ophiura are sometimes present, but are much more common in slightly coarser sediments. Low numbers of the anemone Pachycerianthus multiplicatus may also be found, and this species, which is scarce in the UK, appears to be restricted to this habitat (Plaza & Sanderson 1997). The infauna may contain significant populations of the polychaetes Pholoe spp., Glycera spp., Nephtys spp., spionids, Pectinaria belgica and Terebellides stroemii, the bivalves Nucula sulcata, Varicorbula gibba and Thyasira flexuosa, and the echinoderm Brissopsis lyrifera. The biotope may include a range of the component fauna, potentially including burrowing megafauna and seapens, burrowing megafauna without seapens or seapens without burrowing megafauna depending on local environmental conditions. This biotope is closely related to the biotope SS.SMu.CFiMu.MegMax and SS.SMu.CFiMu.SpnMeg.Fun and may be have infaunal communities similar to the biotopes SS.SMu.CFiMu.BlyrAchi or SS.SMu.IFiMu.PhiVir, depending on environmental factors.

These soft mud habitats occur extensively throughout the more sheltered basins of sea lochs and voes and are present in quite shallow depths (as little as 15 m) in these areas probably because they are very sheltered from wave action. Seapens may be absent in biotope variants impacted by abrasion pressures.

SS.SMu.IFiMu.PhiVir is superficially similar to SS.SMu.CFiMu.SpnMeg but is found in shallower, less thermally stable waters and lacks the large burrowing species and the sea pen Pennatula phosphorea.

SS.SMu.CFiMu.SpnMeg is closely allied to SS.SMu.CFiMu.BlyrAchi and may show strong similarities in infaunal species composition. However, epifaunally they differ in the abundance of characterising species such as Pennatula phosphorea and Amphiura spp.

SS.SMu.CFiMu.MegMax is found in similar habitats but has reduced numbers of seapens and a wider range of megafauna.