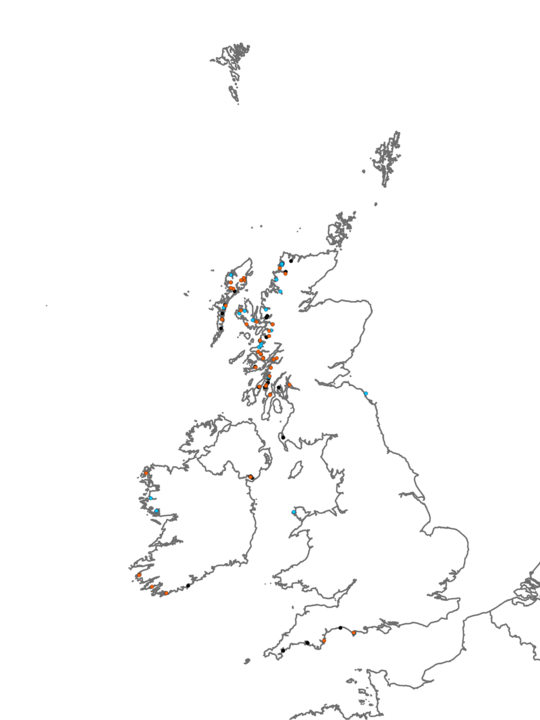 Physically very stable muds, occasionally with small stones, with a high proportion of fine material (typically greater than 80 %) may contain the opisthobranch Philine aperta and the seapen Virgularia mirabilis. These muds typically occur in shallow water down to about 12-15 m where significant seasonal variation in temperature is presumed to occur. This habitat is restricted to the most sheltered basins in, for example, sealochs. Although most records suggest full salinity conditions are prevalent, some sites may be subject to variable salinity. Philine aperta is the most characteristic species of this habitat, occurring in high densities at many sites, whilst Virgularia mirabilis, a species found more widely in muddy sediments, appears to reach its highest densities in this shallow mud but may not be present in all examples of this biotope. Other conspicuous species found in this shallow muddy habitat include Cerianthus lloydii, Pagurus bernhardus, Sagartiogeton spp. and Hydractinia echinata. Burrowing crustacean megafauna, characteristic of deeper mud, are rare or absent from this shallow sediment although Nephrops norvegicus may sometimes be recorded. This biotope has been primarily recorded on the basis of its epifauna and a few conspicuous infauna. Little data exists on the infaunal component of this biotope but it may include Nephtys spp., spionid polychaetes, Ampelisca spp. and the bivalves Nucula spp., Thyasira flexuosa, Mysella bidentata and Abra spp. In the south of Great Britain, the polychaete Sternaspis scutata is also characteristic of this biotope. This polychaete is rare in Great Britain (Sanderson 1996). Indeed, this southern variant of the biotope is very restricted in the UK to Portland Harbour but is known to occur further south in the Gulf of Gascony and the Mediterranean (Glemarec 1973; Dauvin et al. 1994).

It is possible that this biotope is a temporal variant of other SMU biotopes. The key species, Philine aperta, may be highly variable from year to year The sediment may also be covered by a diatom film at certain times of the year

SpnMeg is similar to PhiVir, but occurs deeper, is more stable, and is characterised by burrowing megafauna and the sea pen Pennatula phosphorea

PhiVir displays some resemblance to BriAchi, but the latter is characterised by a high abundance of ophiuroid species particularly Amphiura spp.

PhiVir may be closely allied to MysAbr, possibly sharing some of the infaunal elements of this biotope. However MysAbr is found on sandier sediments

SundAasp appears to be an impoverished (disturbed?) version of PhiVir lacking in P. aperta and V. mirabilis.