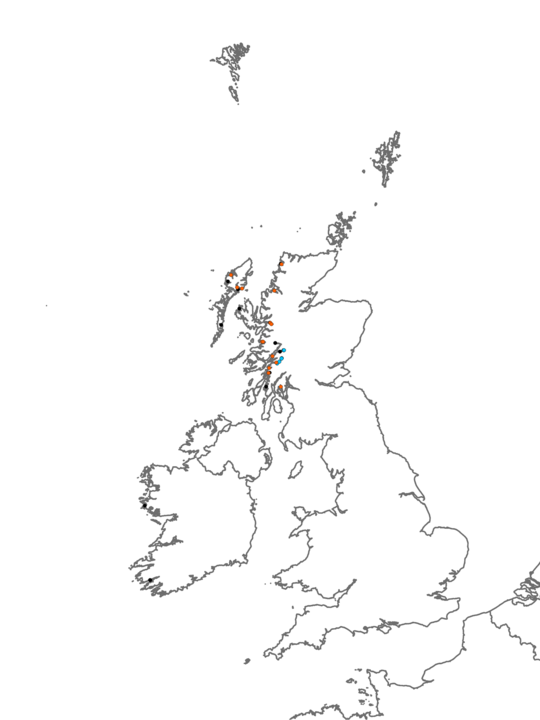 Mud in deep offshore, or shallower stable nearshore, waters can be characterised by the urchin Brissopsis lyrifera and the brittle star Amphiura chiajei. Where intense benthic dredge fishing activity occurs, populations of the indicator species, Brissopsis lyrifera may be depressed, although broken tests may still remain (E.I.S. Rees pers. comm. 1997; M. Costello pers. comm. 1997). Low numbers of the seapen Virgularia mirabilis may be found in many examples of this biotope. In addition, in certain areas of the UK such as the northern Irish Sea, this community may also contain Nephrops norvegicus and can consequently be the focus for fishing activity (Mackie, Oliver & Rees 1995). Infaunal species in this community are similar to those found in SpnMeg and include the polychaetes Nephtys hystricis, Pectinaria belgica, Glycera spp. and Lagis koreni and the bivalves Myrtea spinifera and Nucula sulcata. This community is the 'Boreal Offshore Mud Association' and 'Brissopsis - Chiajei' communities described by other workers (Petersen 1918; Jones 1950).

SpnMeg is closely allied to BriAchi and may show strong similarities in infaunal species composition. However, epifaunally they differ in the abundance of characterising species such as Pennatula phosphorea and Amphiura spp.

This community is similar to AfilMysAnit but tends to occur in deeper and siltier muds. Transitional communities between the two may contain large numbers of Turritella communis.