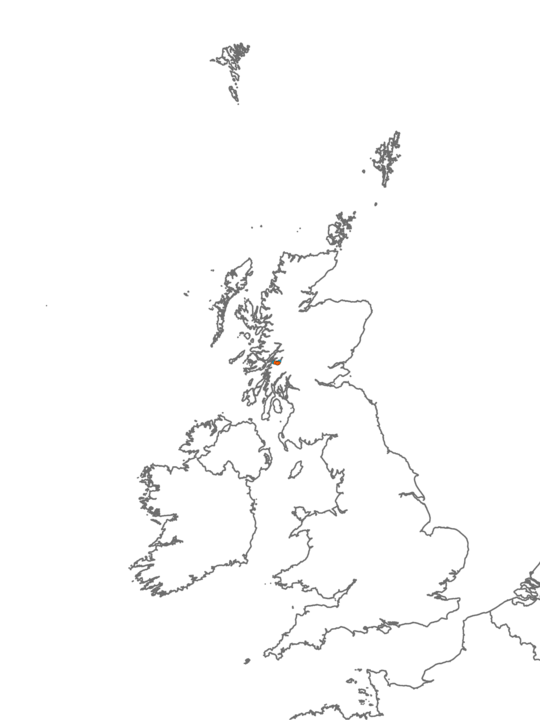 This biotope typically occurs on circalittoral mixed substrata (bedrock, boulders, cobbles, pebbles and gravel) in the moderately strong, tide-swept narrows near the entrance of Loch Etive, although not in the extremely tide-swept Falls of Lora. This sea loch is unique in having a substantial freshwater input from the surrounding moorland, yielding the most brackish, large sea loch in Scotland. Large growths of the brackish-tolerant sponge Halichondria bowerbanki cover the cobble and boulder seabed, interspersed with Mycale lobata, the hydroid Eudendrium arbusculum and the bryozoan Alcyonidium diaphanum which are particularly characteristic of these conditions. Tufts of the bryozoan Eucratea loricata are occasional in most areas. Other species recorded include Carcinus maenas, Asterias rubens, Crossaster papposus, Buccinum undatum, Pagurus berhardus, Henricia spp., Onchidoris bilamellata and Palio dubia, tolerant of the low salinity, are found in the circalittoral throughout this area. Ascidians such as Ascidiella scabra and Corella parallelogramma may also be present. A very impoverished low salinity version is present in the upper basin of Loch Etive. The biotope CuSpH is similar in several respects to this biotope and will develop in less brackish situations where species-richness is generally greater.

This sub-biotope occurs in more marine conditions in the outer parts of estuaries. A diverse range of cushion sponges and hydroids are present, unlike HbowEud.