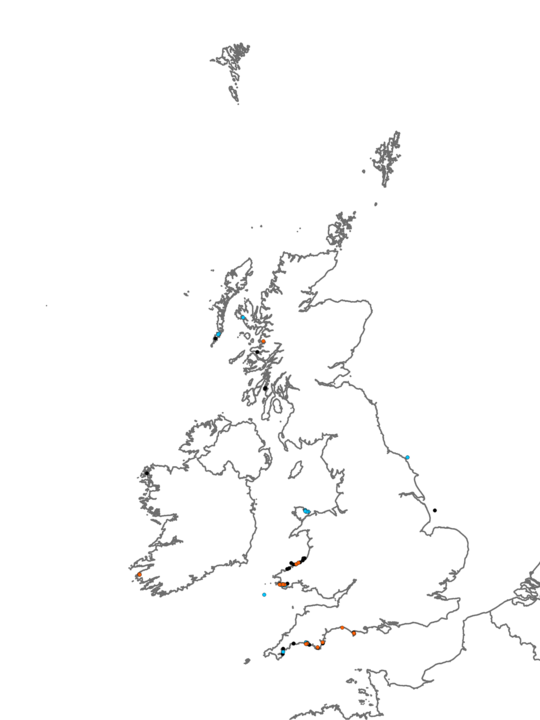 In infralittoral cohesive sandy mud, in sheltered marine inlets, and occasionally variable salinity environments, dense populations of the polychaete Melinna palmata may occur, often with high numbers of Magelona spp. and the bivalve Thyasira flexuosa. Other important taxa may include Chaetozone gibber, Nephtys hombergii, Galathowenia oculata, Euclymene oerstedii, Ampelisca tenuicornis, Ampharete lindstroemi, Abra alba, and Phoronis sp. In addition the polychaete Aphelochaeta spp. and the gastropod Turritella communis may be common or abundant in some areas. At the sediment surface visible taxa may include occasional Virgularia mirabilis, and mobile epifauna such as Pagurus bernhardus. This biotope is characteristic in many southern UK marine inlets and in some areas e.g. Plymouth Sound during high levels of recruitment when M. palmata often occurs in abundances between 500 to 1000 per m2 moderate numbers of the species often 'overspill' into adjacent biotopes (Allen et al. 2001).

In many areas this biotope is found on or near the boundary between euryhaline and polyhaline waters and in such areas moderately high numbers of Aphelochaeta spp. are often recorded.

Numbers of M. palmata tend to vary considerably from year to year presumably due to recruitment and/or adult mortality.

The current biotope displays some similarity to AalbNuc but is found in shallower water, muddier sediments and often in estuarine influenced areas.

In some areas the current biotope may resemble a more diverse, marine version of AphTubi and it is possible that MelMagThy occupies an intermediate position between AphTubi and AalbNuc.