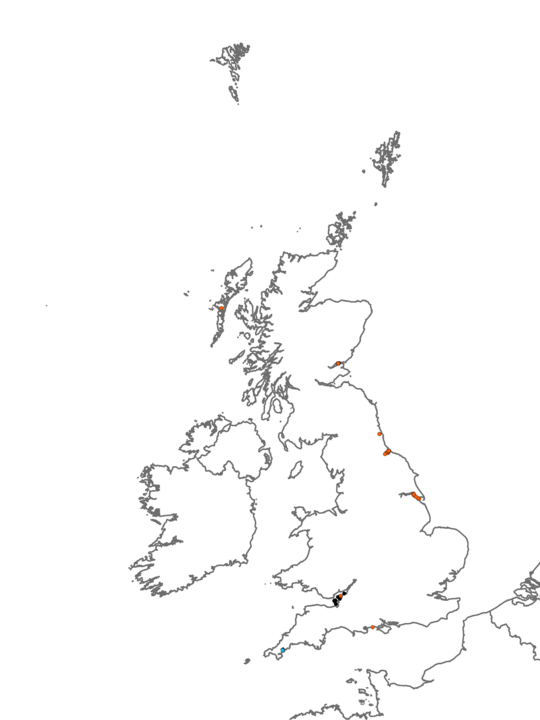 Reduced or variable salinity muddy sediment characterised by the Capitella capitata species complex with a relatively low species richness. Large numbers of the oligochaetes Tubificoides spp. may be found in conjunction with C. capitata, along with other species such as Marenzellaria sp, Macoma balthica, Arenicola marina and Eteone longa. In some estuaries this biotope may also include high numbers of the polychaete Ophryotrocha. This biotope usually has a moderate organic content, and is found away from tidal channels in estuaries. The presence of dense Capitella has classically been associated with organically enriched and physically disturbed habitats in the marine environment (Warren 1977; Pearson & Rosenberg 1978) and areas of higher organic loads in estuaries will typically fall into the biotope Cap. Where Capitella is less abundant and accompanied by other typical estuarine species the dominance of Capitella may be associated with other natural factors including the occurrence of a competitive refuge for C. capitata in the reduced-salinity environment (Wolff 1973).

OlVS can be separated from CapTubi by a swap in the dominant species from C. capitata to Tubificoides spp. and OlVS frequently occurs in lower salinity.

MoMu may contain a similar suite of species to CapTubi although in lower abundance. Only a description of the sediment consistency in the field would allow positive classification

Cap tends to occur in fully marine conditions or in estuarine areas of high organic enrichment and can be distinguished by the reduced species richness as compared to CapTubi.