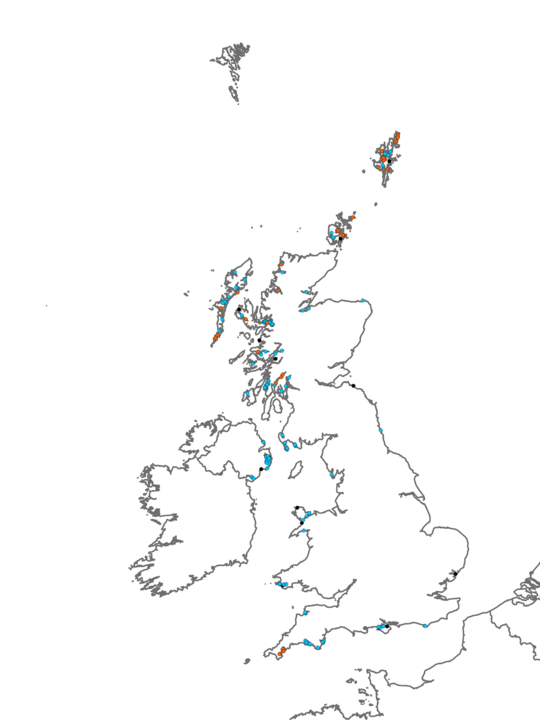 Sheltered to extremely sheltered full salinity lower eulittoral mixed substrata with dense stands of the wrack Fucus serratus. The crab Carcinus maenas and a large number of winkles such as Littorina littorea and Littorina obtusata/mariae can be found amongst the pebbles and cobbles as well as large individuals of the mussel Mytilus edulis, commonly occurring in clumps. On these mussels and on larger cobbles are the barnacle Semibalanus balanoides and the limpet Patella vulgata. Red algae such as coralline crusts including Lithothamnion spp. and the tube-forming polychaetes Pomatoceros triqueter and Spirorbis spp. can be found on cobbles and boulders. Spirorbis spp. can also be found on the F. serratus fronds. Sediment in the spaces between the loose substrata may support infauna including the polychaete Arenicola marina. The red seaweed Mastocarpus stellatus and the wrack Ascophyllum nodosum can occur in patches, while the green seaweeds Enteromorpha intestinalis and Cladophora spp. can be found among the mussels and underneath the F. serratus canopy.

Fserr.X occurs in the lower eulittoral below the biotopes dominated by the wrack Fucus vesiculosus and A. nodosum (Fves.X or Asc.X) on mixed substrata shores, or on sediment shores where mixed substrata occurs in discrete patches on the lower shore. Fserr.X occurs above biotopes dominated by the kelp Laminaria digitata or Laminaria saccharina (Ldig.Ldig; Lsac.Ldig; Lsac.Ft) depending on the substrata.

Occurs on similar, but tide-swept substrata. It has a community dominated by filter-feeders such as the sponges Hymeniacidon perleve and the bryozoan Electra pilosa.

Occurs in full salinity on lower eulittoral bedrock and boulders, which are influenced by strong tidal streams. Filter-feeders such as hydroids Dynamena pumila or the bryozoans Alcyonidium spp. are present. Sponges such as Halichondria panicea and foliose red seaweeds such as Lomentaria articulata or Chondrus crispus are present.