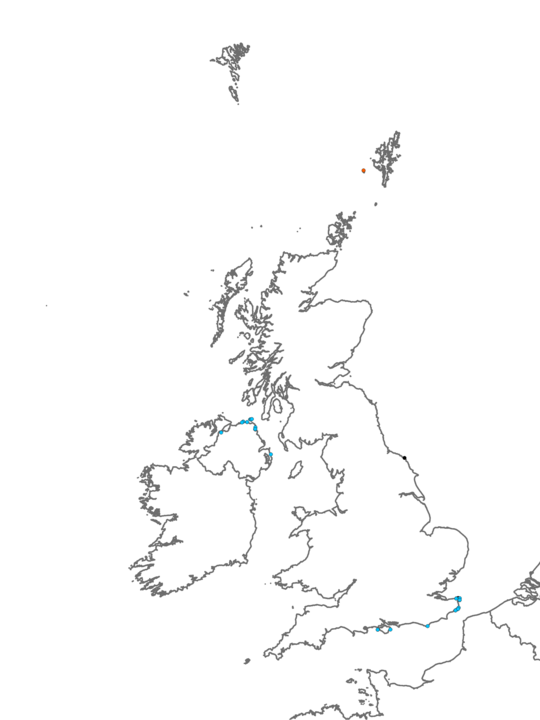 Vertical soft rock in the littoral fringe may be characterised by a band of the green seaweeds Blidingia minima and Blidingia marginata. Unbranched filamentous green seaweeds, including Ulothrix flacca and Urospora wormskioldii, are found amongst the Blidingia spp. The siphonous Xanthophyceae Vaucheria spp. can also occur in high abundance in this biotope, where they can form dense mats. During low tide terrestrial fauna such as red mites, insects and centipedes migrate into this zone. More information is needed to improve this description.

Bli is found below the Verrucaria maura zone (Ver.Ver) and above a band of the similar looking green algae Enteromorpha spp. (Ent and EntPor), where these occur in habitats not influenced by freshwater.

Occurs in similar physical conditions, but usually on freshwater influenced rock. Ulothrix flacca and Urospora spp. are the dominant species.

Occurs similar physical conditions at a wide exposure range. Also on freshwater-influenced rock, but below the Bli. Enteromorpha spp. dominate instead of Blidingia spp., but care should be taken in distinguishing and recording these as separate biotopes as the green seaweeds are superficially similar.