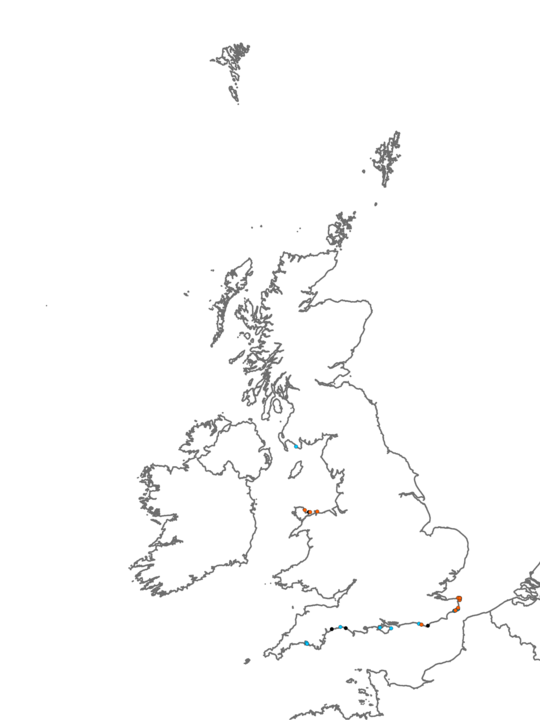 Soft rock, such as chalk, in the sublittoral fringe characterised by Laminaria digitata and rock-boring animals such as piddocks Barnea candida and Pholas dactylus, the bivalve Hiatella arctica and worms Polydora spp. Beneath the kelp forest, a wide variety of foliose red seaweeds occur such as Palmaria palmata, Chondrus crispus, Membranoptera alata and Halurus flosculosus. Filamentous red seaweeds often present are Polysiphonia fucoides and Ceramium nodulosum, while coralline crusts cover available rock surface. The bryozoan Membranipora membranacea and the hydroid Dynanema pumila can form colonies on the kelp fronds, while the bryozoan Electra pilosa more often occur on the foliose red seaweeds. Empty piddock burrows are often colonised by the polychaete Sabellaria spinulosa or in more shaded areas the sponges Halichondria panicea and Hymeniacidon perleve. The undersides of small chalk boulders are colonised by encrusting bryozoans, colonial ascidians and the tube-building polychaete Pomatoceros lamarcki. The boulders and any crevices within the chalk provide a refuge for small crustaceans such as Carcinus maenas, the mussel Mytilus edulis or the barnacle Semibalanus balanoides. The echinoderm Asterias rubens is present as well.

This biotope occurs on moderately exposed soft rock where Ldig.Ldig would normally occur. Above it may lie a zone of Fucus serratus on similarly bored soft rock (Fser.Pid) or a variant of one of the F. serratus biotopes (Fser.R or Fser.Fser). Lower shore sites influenced by sand may have more Mytilus edulis beneath the seaweed canopy (MytFR) or the sand-binding red seaweed Rhodothamniella floridula (Rho). Below the Ldig.Pid biotope a variety of biotopes can occur such as LsacChoR on unstable infralittoral cobbles and boulders or even MCR.Pid in the turbid waters of south-east England where the kelp generally extends to less than 4m BCD.

The under-storey of foliose and filamentous seaweeds will diminish towards the autumn and regrow in the spring. Since the soft rock does not provide a strong hold for the seaweeds they are easily dislodged during storm periods. After such an event the green seaweeds Enteromorpha spp. and Ulva spp. and/or the red seaweed P. palmata may temporarily cover much of the rock. Eventually a more diverse range of seaweeds and associated animals will re-establish on the rock.

Dense canopy of L. digitata on exposed to sheltered sublittoral fringe bedrock or boulders often with a wide range of filamentous and foliose red seaweeds beneath. Without the rock-boring fauna such as piddocks B. candida, P. dactylus and P. pholadiformis, the bivalve H. arctica and worms Polydora spp. associated soft rock biotopes.