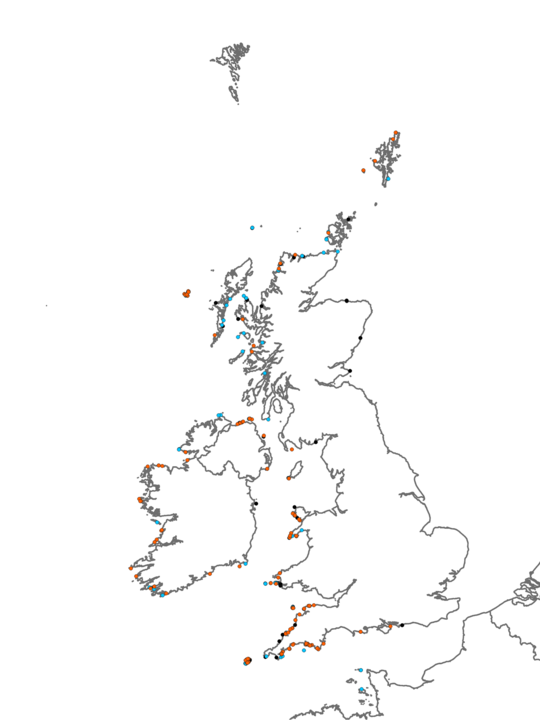 On exposed coasts with moderately strong to weak tidal currents generally at depths of 0-10m, vertical rock communities dominated by frequent Laminaria hyperborea and its commonly associated red seaweeds Delesseria sanguinea, Cryptopleura ramosa and Plocamium cartilagineum can be found. Within this biotope the jewel anemone Corynactis viridis is frequently found in dense aggregations attached to the vertical rock surface. This biotope contains 5 sub-biotopes, distinguished by their biogeography. On the west coast of Scotland, the Northern Isles and the Isle of Man on extremely exposed coasts a variant of this biotope characterised by frequent Metridium senile and occasional Sagartia elegans can be found. Further south on the west coast of Ireland, southern Scotland, Wales, and south west England a second variant characterised by frequent Alcyonium digitatum and occasional Cliona celata can be distinguished. A third variant has been recorded from Northern Ireland characterised by the red seaweeds Lithophyllum and Ptilota gunneri, the sea squirt Dendrodoa grossularia and the bryozoan Membranipora membranacea. South from the Isle of Man, on the Welsh Coast, and on the south west and southern English coasts a fourth variant of this biotope is found, which is characterised by the barnacle Balanus crenatus, which may be more frequent in this sub-biotope, and the rarity of Alcyonium digitatum, a species which is more frequent in other variants. This variant has mainly been recorded in shallow water (0-5m). The final biogeographic variant of this biotope is, as with the previous variant, found on the coasts of Wales and south west England. It can be distinguished from the previous variant by the frequent Diplosoma listerianum and occasional Lissoclinum perforatum, although these species are not always present.

Open rocky coasts of the south-west, west and north-west.

Much more species poor, with red algae sparse or absent.