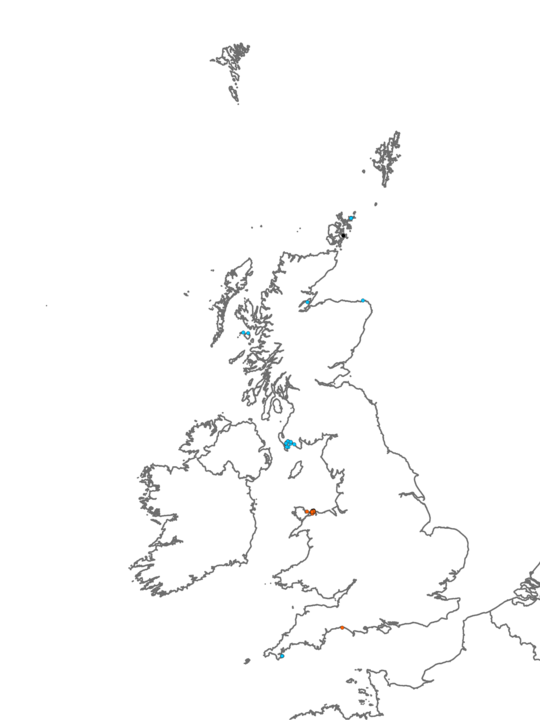 In shallow non-cohesive muddy sands, in fully marine conditions, a community characterised by the bivalve Spisula subtruncata and the polychaete Nephtys hombergii may occur. The sediments in which this community is found may vary with regard silt content but they generally have less than 20% silt/clay and in some areas may contain a degree of shell debris. This biotope falls somewhere between SSA.FfabMag and SSA.AalbNuc with regard sediment type (i.e. somewhat muddier than SSA.FfabMag and less muddy than SSA.AalbNuc) and may have species in common with both. As a result, other important species in this community include Abra alba, Fabulina fabula spp. and Mysella bidentata spp. In addition, Diastylis rathkei/typical, Philine aperta (in muddier sediments), Ampelisca spp., Ophiura albida, Phaxas pellucidus and occasionally Bathyporeia spp, may also be important, although this is not clear from the data available. In areas of slightly coarser, less muddy sediment S. solida or S. elliptica may appear occasionally in this biotope. Abundances of Spisula subtruncata in this biotope are often very high and distinguish it from other closely related biotopes. Extensive areas of this community to the north east of the Dogger Bank were recorded in the 1950s, but these seem to have declined since then (Kroncke 1990). More information is required with regard the status of this biotope.

In some areas this biotope may be a temporal variant or sub-biotope of SSA.FfabMag and SSA.AalbNuc rather than an established biotope in itself. For example SSA.SsubNhom has been recorded in Red Wharf Bay and Conwy Bay where it appears to be short term variant of other more established biotopes (e.g. SSA.AalbNuc) and appears to have only intermittent occurrence in single age cohort patches possibly due to predation in some areas (e.g. Red Wharf Bay) by the common Scoter Melanitta nigra (E.I.S. Rees pers. comm. 2002).

SsubNhom is found on slightly siltier and/or shelly sand and can be distinguished by the dominance of S. subtruncata.

SsubNhom is less muddy than AalbNuc and can be distinguished by the dominance of Spisula.