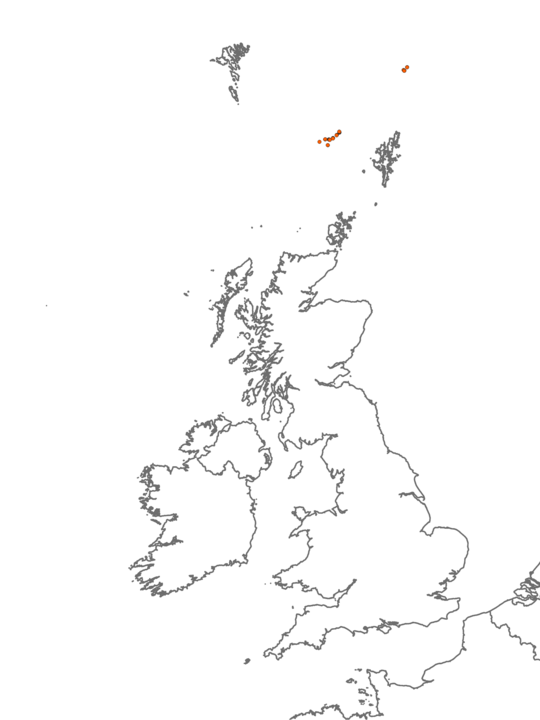 The Atlanto-Arctic is an area of mixing between warm Atlantic waters and cool Arctic waters, where water temperature fluctates dramatically between approximately 0 and 8°C. Atlanto-Arctic waters are subducted under Atlantic upper bathyal waters; the Atlanto-Arctic zone makes up the lower section of the upper bathyal in this region. Atlanto-Arctic upper bathyal seabed habitats occur at depths of approximately 300 - 600 m in the Faroe-Shetland channel, although this may vary locally. The Atlanto-Arctic is included as a separate zone as it is associated with a distinct water mass and the composition of the biological community is very different to other areas due to the fluctuating water temperature. Communities found in this zone are described in child habitats. Biological zones are three-dimensional biogeographical regions which represent changes in biological community both spatially around the UK and vertically in relation to depth. Biological zones have some overlap in the types of community which can occur. The boundaries relate to areas of greatest change in overall species composition. The boundaries of zones are based on water mass structure which drives differences in biology. Rough boundaries of the zones have been predicted using modelled environmental data; a GIS proxy biogeographic zone layer can be downloaded from the Marine Habitat Classification download page. The depths of upper and lower boundaries depend on several variables, so the given depth range should be treated as a guide only.