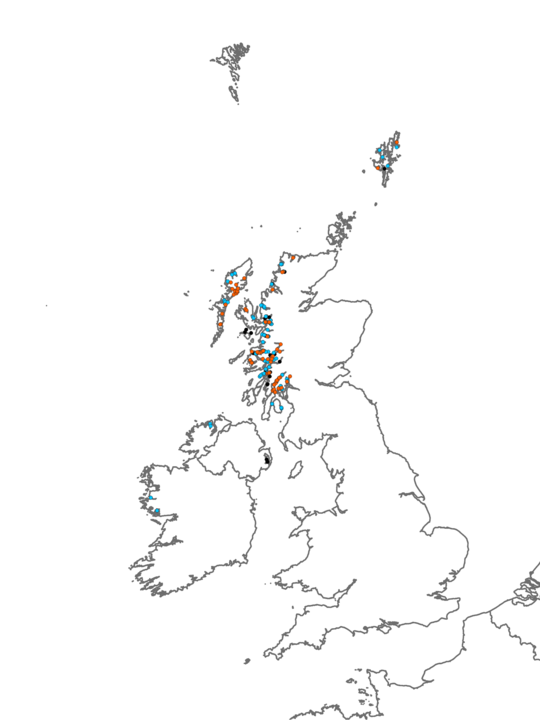 This biotope predominantly occurs on the upper faces of wave-sheltered (often sealochs) circalittoral bedrock, boulder and cobble slopes with little tidal flow. Apart from the solitary ascidians Ciona intestinalis and Ascidia mentula, this biotope has a rather barren, pink appearance (due to the encrusting red algae), possibly due to grazing pressure from the sea urchin Echinus esculentus. Other organisms found encrusting the rocky surface include the polychaete Pomatoceros triqueter and the cup coral Caryophyllia smithii. Other species occasionally encountered include Alcyonium digitatum, Asterias rubens, Pagurus berhardus, Crossaster papposus, Antedon bifida and Metridium senile. Crustaceans such as Munida rugosa and Cancer pagurus may be recorded in crevices. Two variants of this biotope exist: AmenCio.Ant and AmenCio.Bri. AmenCio.Bri occurs where is a dense carpet of brittlestars which sometimes completely cover the rocky substratum. Species present include Ophiothrix fragilis, Ophiocomina nigra and Ophiura albida.

The abundance of C. intestinalis tends to fluctuate seasonally, so it may appear absent at a site at one time of year and then be present at other times, altering the visual appearance of the biotope. Other solitary ascidian species such as A. mentula and Ascidiella aspersa tend to be longer-lived (approximately 7 years and 3 years, respectively).