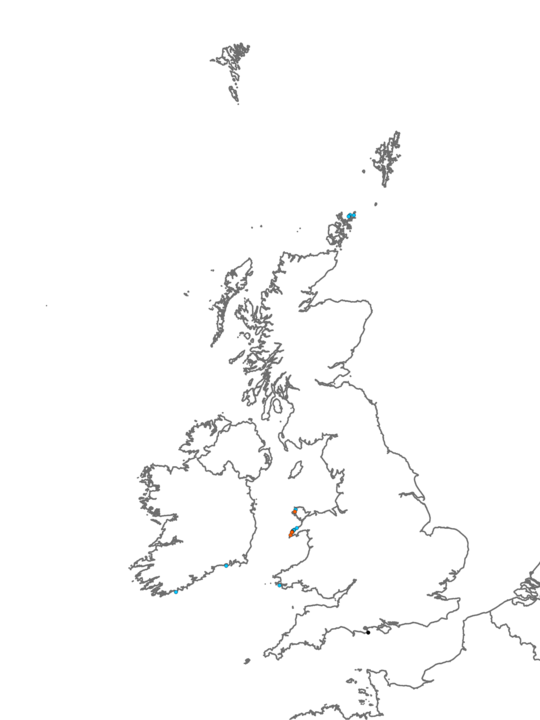 This biotope typically occurs on the upper faces of moderately exposed, moderately tide-swept bedrock, boulders and cobbles in slightly silty conditions. The mussel Musculus discors occurs in dense mats and occasionally completely coats all available surfaces. There is also often a layer of pseudofaeces, forming a thick, silty matrix. A relatively diverse fauna of cushion and branching sponges is often present on rocky outcrops and other hard substratum that is free of mussels. These include Tethya aurantium, Scypha ciliata, Pachymatisma johnstonia, Dysidea fragilis, Cliona celata and Stelligera stuposa. There may be isolated clumps of silt-tolerant bryozoans such as Flustra foliacea and Bugula plumosa. Various species may be observed on top of the mussels, including Asterias rubens, Crossaster papposus and the brittlestar Ophiura albida. Occasional Alcyonium digitatum and clumps of the hydroid Nemertesia antennina are found attached to rocky outcrops and boulders whilst the anemone Urticina felina may be seen in crevices in the rock or on gravely patches between boulders. Colonial ascidians such as Clavelina lepadiformis and didemnids may occasionally be present. A wide range of seaweeds may be present, including Dictyota dichotoma, Plocamium cartliagineum, Dictyopteris membranacea, Cryptopleura ramosa and Heterosiphonia plumosa. The crab Cancer pagurus may be observed in crevices. The majority of the records for this biotope are from the Lleyn Peninsula.

M. discors may be present in this biotope, but at nowhere near the density present in Mdis.