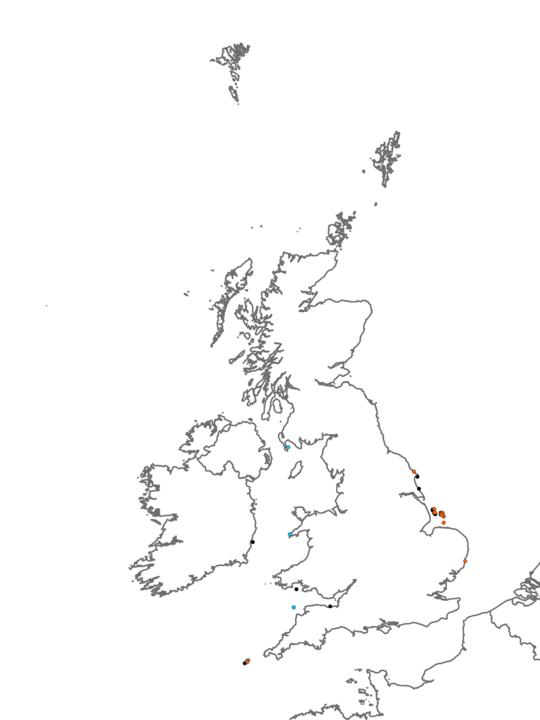 In infralittoral mixed slightly gravelly sands on exposed open coasts impoverished communities characterised by the polychaete Glycera lapidum (agg.) may be found. Glycera lapidum is a species complex and as such some variability in identification may be found in the literature. It is also quite widespread and may occur in a variety of coarser sediments and is often present in other SCS biotopes. However, it is rarely considered a characteristic species and where this is the case it is normally due to the exclusion of other species. Consequently it is considered that habitats containing this biotope may be subject to continual or periodic sediment disturbance from wave action, which prevents the establishment of a more stable community. Other taxa include spionid polychaetes such as Spio martinensis and Spiophanes bombyx, Nephtys spp. and in some areas the bivalve Spisula elliptica. It is possible that SCS.Glap it is not a true biotope, rather an impoverished, transitional community, which in more settled conditions develops into other more stable communities.

In many cases e.g. along the East Yorkshire coast this biotope is found in shallow inshore areas facing directly into the prevailing wind and subject to considerable wave action.

Due to the variability in sediment regime at these habitats there may be high seasonal or spatial variability within this community.

Glap may a coarser extension of the mobile sand biotope IMoSa

The offshore biotope (GlapThyAmy) is also characterised by Glycera lapidum but it is not known at this stage whether Glap is a shallow extension of this much deeper biotope.