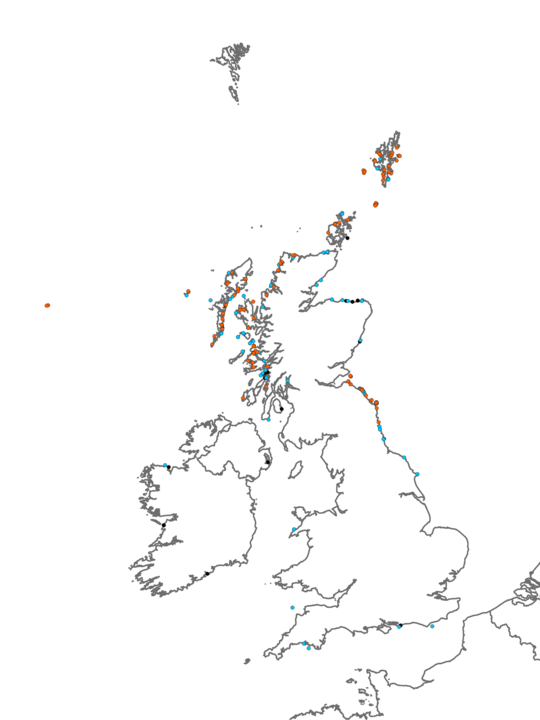 This biotope typically occurs on the vertical faces and overhangs of exposed to moderately exposed lower infralittoral and upper circalittoral bedrock subject to moderately strong to weak tidal streams. Due to the large numbers of the urchin Echinus esculentus often recorded, this biotope tends to have a grazed appearance, and the bedrock is often encrusted with pink coralline algae, encrusting bryozoans such as Parasmittina trispinosa and the calcareous tubeworm Pomatoceros triqueter. Dense aggregations of dead mans fingers Alcyonium digitatum may be present along with the cup coral Caryophyllia smithii. Other species present include the echinoderms Asterias rubens, Ophiothrix fragilis and Antedon bifida, the ascidians Clavelina lepadiformis, Ciona intestinalis and Ascidia mentula, the anthozoans Urticina feline, Cortynactis viridis, Metridium senile and Sagartia elegans, the gastropod Calliostoma zizyphinum and the crustacean Cancer pagurus. Three regional variations of this biotope have been recorded. One variant found typically off the north-east coast of Scotland and around the Northern Isles, has a very impoverished appearance dominated by anthozoans. A second variant occurs along the west coast of Scotland, extending to Rockall in the west, and the Northern Isles in the north-east, and has a more fauna, characterised by hydroids, sponges, anthozoans and echinoderms. A third variant occurs along the north-east coast of England (Northumberland) up to the Northern Isles and is dominated by Alcyonium digitatum, brittlestars and Echinus esculentus.