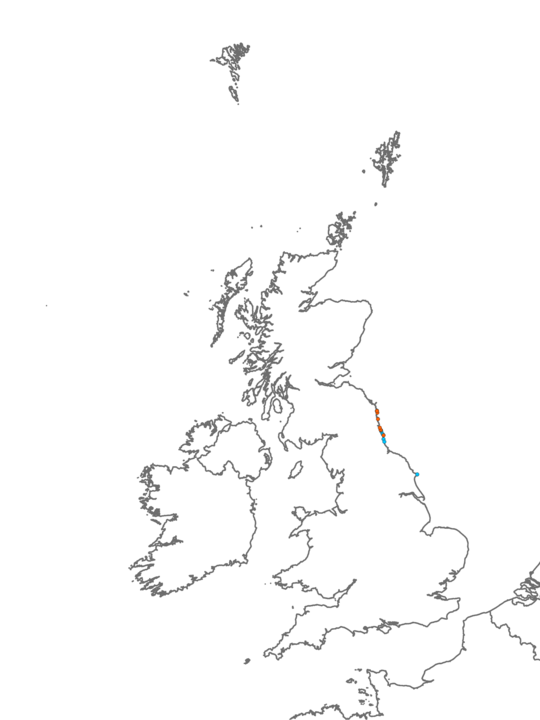 Laminaria hyperborea kelp forest on shallow infralittoral bedrock and boulders characterised by encrustations of Sabellaria spinulosa tubes which cover much of the rock, together with sand-tolerant red seaweeds such as Phyllophora pseudoceranoides, Dilsea carnosa and Polysiphonia elongata and Polysiphonia fucoides. Red seaweeds such as Plocamium cartilagineum and Delesseria sanguinea may also be found beneath the kelp canopy, although typically low in abundance. They can be colonised by the ascidian Botryllus schlosseri. The cowrie Trivia arctica can also be found here. Much of the available rock is covered with encrusting coralline algae together with patches of the encrusting sponge Halichondria panicea and the anthozoan Urticina felina. More mobile fauna include the echinoderms Asterias rubens, Henricia sanguinolenta, Echinus esculentus, and Ophiothrix fragilis, the gastropod Gibbula cineraria and the hermit crab Pagurus bernhardus. The scouring effect of mobile sand adjacent to the rock maintains a reduced underflora and fauna compared to the association of species found in non-scoured kelp forests (Lhyp.Ft). Scour-resistant fauna such as the barnacle Balanus crenatus can be locally abundant on the rock, while the bivalve Pododesmus patelliformis can be found seeking shelter underneath the cobbles. Above the effect of scour, kelp stipes may be densely colonised by red seaweeds such as Phycodrys rubens, Palmaria palmata and Membranoptera alata, together with some sponges and ascidians.

This biotope is found in the sand-laden waters of north-east England in conditions in which S. spinulosa is able to thrive. Nearby circalittoral rock is often also dominated by S. spinulosa (Sspi) but lacks the kelp and red seaweeds. As this biotope is not commonly recorded in the UK there is a scarcity of information relating to the surrounding biotopes.

A similar biotope is found in the circalittoral zone, where it lacks the algal component.