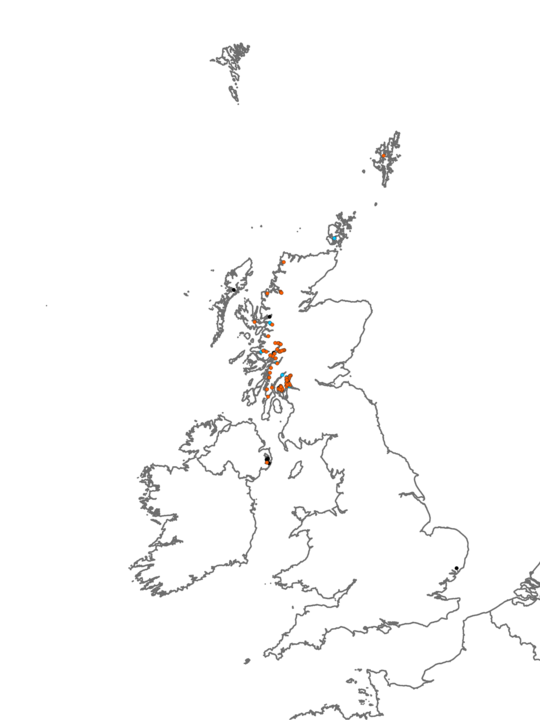 Pebbles and cobbles on mud or muddy gravel in sealochs with frequent Cerianthus lloydii and occasional Modiolus modiolus. Large burrowing holothurians may include Psolus phantapus, Paracucumaria hyndmani, Thyonidium commune, Thyone fusus and Leptopentacta elongate. Many of these species only extend their tentacles above the sediment surface seasonally and are likely to be under recorded by epifaunal surveys. Other more conspicuous characterising taxa include Pagurus bernhardus, Asterias rubens, and Buccinum undatum. This biotope is well developed in the Clyde sealochs, although many examples are rather species-poor. Some examples in south-west Scottish sealochs have greater quantities of boulders and cobbles and therefore have a richer associated biota (compared with other sheltered Modiolus bed biotopes such as ModHAs). Examples in Shetland are somewhat different in having the cucumber Cucumaria frondosa amongst sparse Modiolus beds and a slightly different balance in abundance of other species; for example the brittlestar Ophiopholis aculeata is more abundant in these far northern examples in the voes and narrows

ModHAs occurs in similar physiographic features, although ClloModHo is in softer sediment in some cases, and with a much lower abundance of Modiolus, and a lower diversity in general. There may some overlap in these two biotopes as several of the holothurians extend their tentacles above the surface of the sediment for only a limited amount of time during the year.