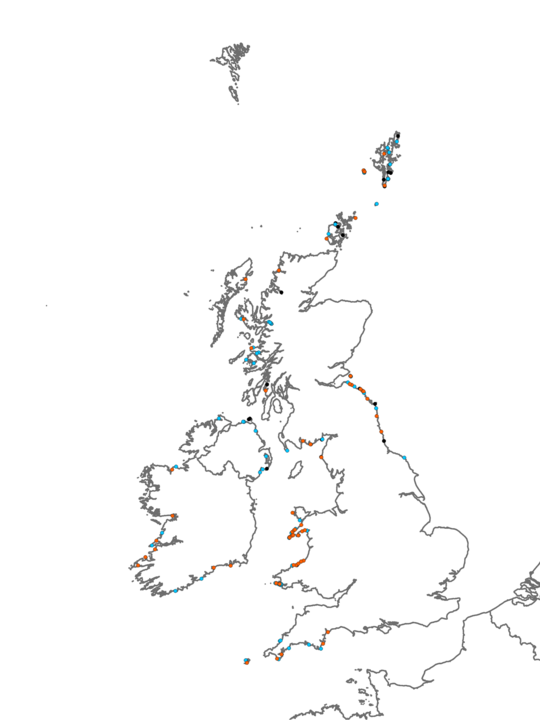 The littoral fringe of very exposed to moderately exposed rocky shores with a sparse covering of the barnacles Semibalanus balanoides and/or Chthamalus montagui over the black lichen Verrucaria maura. Winkles Littorina saxatilis and Melarhaphe neritoides are usually present although M. neritoides tends to be found on more exposed shores. The limpet Patella vulgata is often present though at a low abundance (Occasional). This biotope can be dominated by ephemeral seaweeds including the red seaweed Porphyra umbilicalis, the green seaweeds Enteromorpha spp. or, particulary in the north, microscopic blue-green algae (Cyanophyceae), which overgrow V. maura. The wrack Pelvetia canaliculata (Rare) may also be present, becoming increasingly more common with greater shelter (see PelB). Geographical variation: On northern and eastern shores the barnacle is usually S. balanoides, which is normally restricted to the lower littoral fringe, with a band of V. maura only in the upper littoral fringe. On south-west and western shores the barnacle is usually C. montagui which may extend over the whole of the littoral fringe zone.

Ver.B is usually found on more exposed coasts below the V. maura biotope Ver.Ver. It is found above the mussel Mytilus edulis and barnacles biotope (MytB) or above the barnacle and Patella spp. zone (Cht.Cht; Sem). Ver.B also occurs on vertical faces of moderately exposed shores where the P. canaliculata biotope (PelB) usually dominates on non-vertical faces.

The abundance of P. umbilicalis shows considerable seasonal and geographical variation. During warm weather P. umbilicalis is often bleached light brown and sticks to the rock as it dries out. On southern shores it may be absent during the summer on all but the most exposed shores, as it dies back leaving a barnacle and lichen dominated community. In the cooler north the P. umbilicalis covering persists throughout the year. Porphyra linearis can also be found in the among the P. umbilicalis during the late winter and spring.

Occurs in similar physical conditions in the upper littoral fringe. The fauna is less diverse and barnacles and ephemeral seaweeds like P. umbilicalis and Enteromorpha spp. are usually absent. 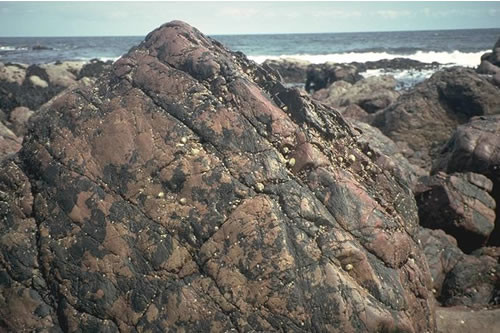 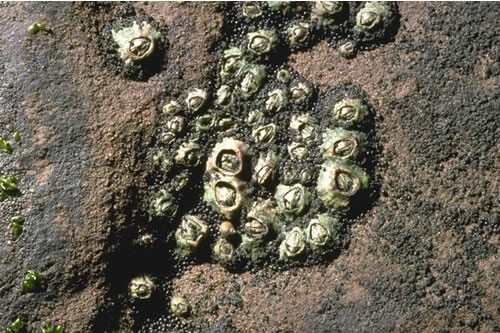