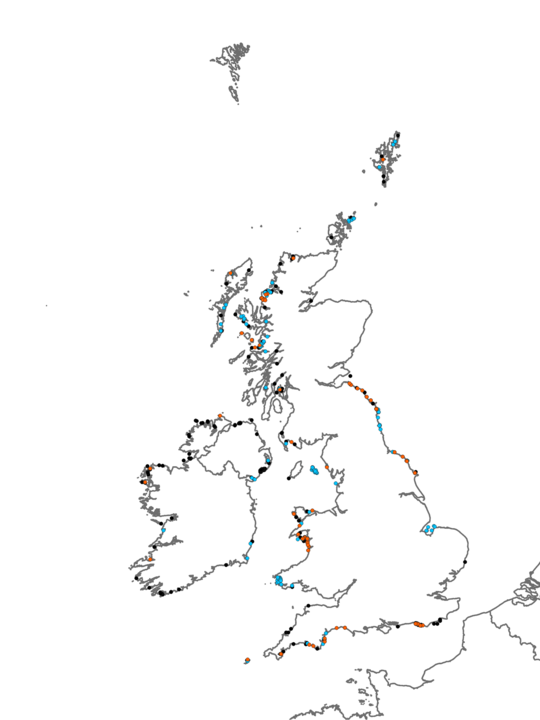 Sheltered lower shore and shallow sublittoral sediments of sand or muddy fine sand in fully marine conditions, support populations of the urchin Echinocardium cordatum and the razor shell Ensis siliqua or Ensis ensis. Other notable taxa within this biotope include occasional Lanice conchilega, Pagurus and Liocarcinus spp. and Asterias rubens. This biotope has primarily been recorded by epifaunal dive, video or trawl surveys where the presence of relatively conspicuous taxa such as E. cordatum and Ensis spp. have been recorded as characteristic of the community. However, these species, particularly E. cordatum have a wide distribution and are not necessarily the best choice for a characteristic taxa (Thorson, 1957). Furthermore, detailed quantitative infaunal data for this biotope is often rather scarce, possibly as a result of survey method as remote grab sampling is likely to under-estimate deep-burrowing species such as Ensis sp. (Warwick & Davis 1977). Consequently, it may be better to treat this biotope as an epibiotic overlay which is likely to overlap a number of other biotopes such as FfabMag, NcirBat and AalbNuc with infaunal components of these biotopes occurring within EcorEns. The precise nature of this infaunal community will be related to the nature of the substratum, in particular the quantity of silt/clay present. Infaunal species may include the polychaetes Spiophanes bombyx, Magelona mirabilis, Nephtys cirrosa and Chaetozone setosa and the amphipod Bathyporeia spp. This biotope is currently broadly defined and needs further consideration as to whether it should be placed at biotope or biotope complex level. AreISa is another biotope based primarily on epibiotic data. It is likely that this biotope and EcorEns form a wider epibiotic sand /muddy sand community with EcorEns biased towards sandier areas and SSA.AreISa towards slightly muddier areas.

In some areas the seagrass Zostera marina may occur in low densites in this biotope but does not form distinct beds as in Zmar.