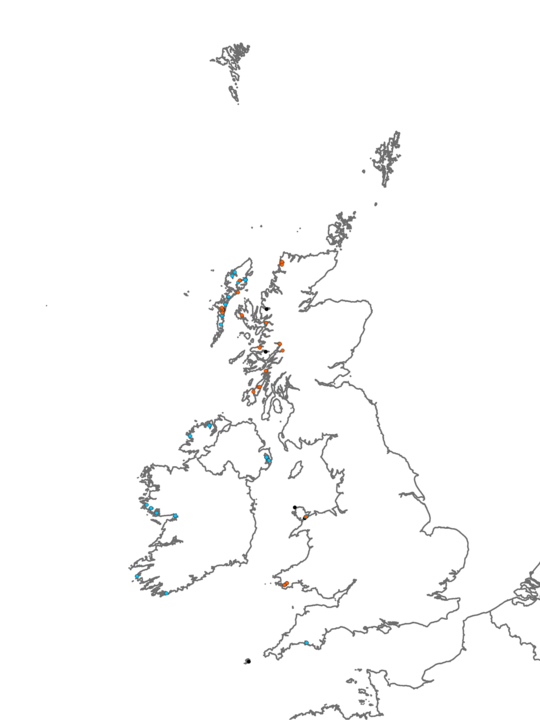 Sheltered bedrock, boulders and cobbles that are subject to moderate to strong tidal water movement characterised by dense Laminaria digitata, coralline crusts and sponges such as Halichondria panicea. Other seaweeds present include the foliose red seaweeds Chondrus crispus, Palmaria palmata, Cryptopleura ramosa and Mastocarpus stellatus as well as the calcareous Corallina officinalis. Green seaweeds present include Ulva lactuca, Enteromorpha intestinalis and Cladophora rupestris. The increased water movement encourages several filter-feeding faunal groups to occur. The sponges Leucosolenia spp., Scypha ciliata and Hymeniacidon perleve frequently occur on steep and overhanging rock faces. The bryozoans Electra pilosa, Membranoptera membranipora and Alcyonidium hirsutum encrust the kelp and other foliose seaweeds. In addition, ascidians such as Ascidiella scabra, Dendrodoa grossularia and colonial ascidians Botryllus byssoides and Botryllus leachi often thrive in this environment encrusting both the rock and the seaweeds. The tube-building polychaete Pomatoceros triqueter can be found on the rock and on the kelp holdfasts along with the barnacle Balanus crenatus. More mobile species such as the gastropods Gibbula cineraria and Calliostoma zizyphinum, the crab Carcinus maenas and the starfish Asterias rubens are also common. Areas where increased tidal movement influences this community can be found in the narrows and/or intertidal sills of sealochs.

This biotope often occurs immediately below the tide-swept Fucus serratus biotope (SLR.Fserr.T) consequently, some F. serratus may occur in this biotope (typically only Occasional). The sublittoral fringe of similarly sheltered shores that are not tide-swept are generally characterised by mixed Laminaria saccharina and L. digitata (Lsac.Ldig) or L. saccharina (Lsac). Below LdigT, at these sheltered, tide-swept sites, a canopy of mixed kelp species often occurs (see XKT and XKTX).

Occur in non tide-swept areas and lacks the characteristic community of filter-feeders, though the individual species may be present. 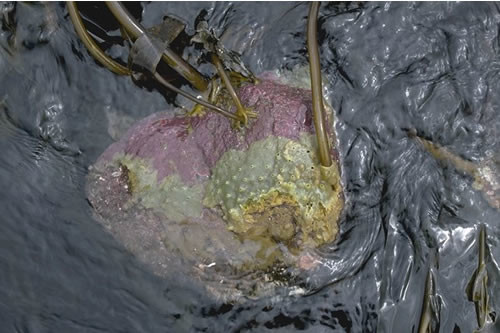 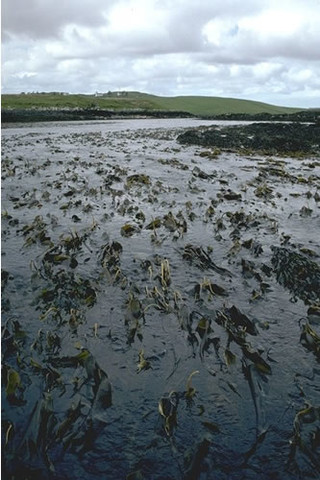