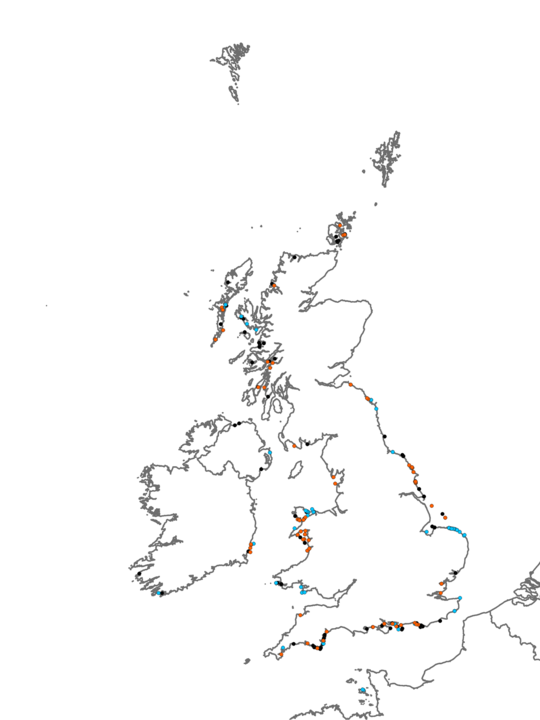 Dense beds of Lanice conchilega occur in coarse to medium fine gravelly sand in the shallow sublittoral, where there are strong tidal streams or wave action. Several other species of polychaete also occur as infauna e.g. Spiophanes bombyx, Scoloplos armiger, Chaetozone setosa and Magelona mirabilis. Lanice beds are found in a wide range of habitats including muddier mixed sediment. The dense Lanice biotope (LGS.Lan) on certain lower shores may be a littoral extension of the current biotope. The presence of L. conchilega in high numbersmay, over time, stabilise the sediment to the extent where a more diverse community may develop (Wood, 1987). Possibly as a result of this, there is a high level of variation with regard the infauna found in SCS.SLan. It is likely that a number of sub-biotopes may subsequently be identified for this biotope. Offshore from the Wash and the North Norfolk coast Lanice beds are often found intermixed with Sabellaria spinulosa beds in muddier mixed sediment, particularly in the channels between the shallow sandbanks, which are so prevalent in this area (IECS, 1995; NRA, 1995). It is possible that the presence of Lanice has stabilised the habitat sufficiently to allow the deposition of finer material, which has subsequently assisted the development of S. spinulosa. It may be more accurate to define SLan as an epibiotic biotope which overlays a variety of infaunal biotopes (e.g. NcirBat in finer sands and AalbNuc or FfabMag in slightly muddier areas).